El Reg reader Jerry Vernon has been in touch to express his amazement that Vodafone can supply broadband to his Birmingham address at a 80Mbps, noticeably faster even than its 76Mbps Ultrafast Fibre package.

That's according to the telco's broadband speed checker (see here), which does indeed indicate breathtaking velocity: 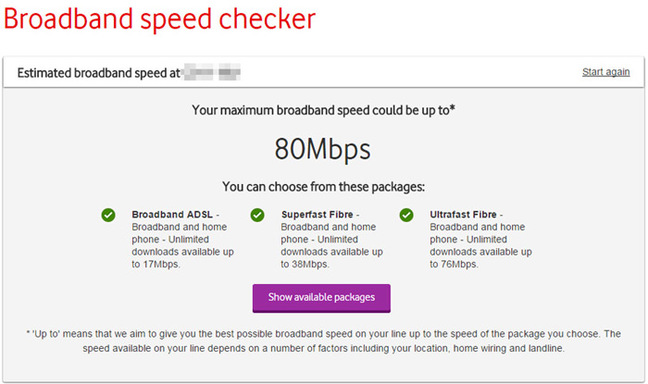 We checked the potential broadband speed at another UK address, picked at random, and got the same result. Impressive stuff. Jerry wondered if we could ask Vodafone to explain, so we did.

A spokesman told us that "while the fibre to the exchange is ours, we use BT for the last mile to the home".

So, here's the deal:

The potential speeds we display on the postcode checker are based ‎on data provided to us by BT Openreach and represent the line sync speed.

We promote our Superfast + [Ultrafast Fibre] package as offering speeds of up to 76Mbps as although customers could potentially achieve higher speeds in some areas, there will inevitably be some network communication/chatter which could lower the speeds slightly.

The spokesman suggested we check the figure for the same postcode address down at BT, and sure enough...

Depending on local conditions, then, you might actually get 80Mbps. Naturally, we're a tad sceptical of the old "up to X speed" claims, which always come with an "*" pointing to the usual disclaimers.

Back at Vodafone, the spokesman concluded by saying the company is looking at "aligning potential line speeds with the packages in the future". ®