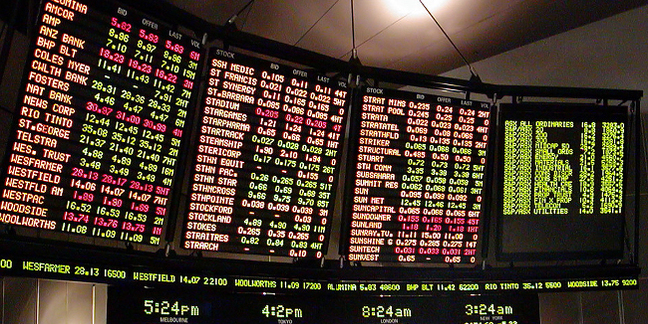 Dow Jones has poured cold water on claims that its servers were penetrated by hackers harvesting information for insider dealing.

On Friday Bloomberg reported that the FBI, US financial watchdog the SEC, and America's Secret Service were probing allegations that a Russian gang stole unpublished financial data and news articles from Dow Jones computers to get an edge on the market.

Bloomberg cited four anonymous sources in its report, one of whom said the investigators reckon the intrusion may have happened over a year ago.

In the past few minutes, Dow told The Reg that it doesn't know what Bloomberg is talking about.

"To the best of our knowledge, we have received no information from the authorities about any such alleged matter, and we are looking into whether there is any truth whatsoever to this report by a competitor news organization," said Colleen Schwartz, VP of communications at Dow Jones. (Dow Jones publishes the Wall Street Journal.)

Dow Jones was forced to admit last week that its subscription systems had been infiltrated by miscreants, and that 3,500 individuals may have had their personal information swiped.

In August, the FBI broke up a Ukrainian hacker gang, arresting nine people on the US East Coast. The team allegedly stole 150,000 press releases over several years from the servers of PR Newswire, Marketwired, and Business Wire. The announcements were nabbed before they were published, giving the thieves a head start on the stock market. ®