And yet another alien hybrid emerges ...

Ah yes, we've reached that part of the series where the Doctor goes to battle with some ancient warmongers – and this time, it's Vikings. He may not be in the mood for them, but I sure am.

And finally, we have someone who is sensible enough to snap those damn sonic sunnies in half.

Sadly, the specs are still working. But then, the Time Lord always needs a bit of sonic jiggery-pokery to get by, I guess.

I like the nudge 'n' wink device the producers use here by casting Game of Thrones star Maisie Williams in the role of Ashildr – a young, wannabe warrior, who over-enthusiastically blunders her way into war with the deadly Mire.

A quickstep on from last week's bootstrap paradox episode, the Doctor – quite rightly – remains preoccupied with fiddling with space and time.

"It's OK to make ripples but not tidal waves," he tells Clara, before seemingly concocting a tsunami by making Ashildr immortal.

This ep opens with an adventure that we only get a glimpse of: Clara loooost innnnn spaaaaace as she fights to stop an alien spider sucking her brains out.

She escapes, of course. But for some of The Girl Who Died, Clara is dressed in an orange spacesuit, bringing to mind last season's excellent Listen, when we saw her boyfriend Danny Pink dressed in the same outfit. A clue for what's to come, perhaps? Or did the props team get lazy? Unlikely.

'On my face right now – more advanced technology than your species will manage over the next nine million years.' *Snap*

As this ep gets underway, we're presented with an ace villain in the form of testosterone-supping Odin – who pleasingly conjures up a mish mash of baddies from the The Hitchhiker's Guide to the Galaxy and 1980s/90s kids' British TV favourite, Knightmare.

Once Clara and Ashildr are teleported onto Valhalla, the Knightmare reference is turned up to 11 as the pair try to dodge being squashed and fried by the evil mercenaries.

Now the scene is set for one of the deadliest warrior races in the galaxy to unleash hell on Ashildr's village.

The Doctor seems uninterested in helping out until, that is, a baby (yes, he reads baby babble) convinces him to stay. 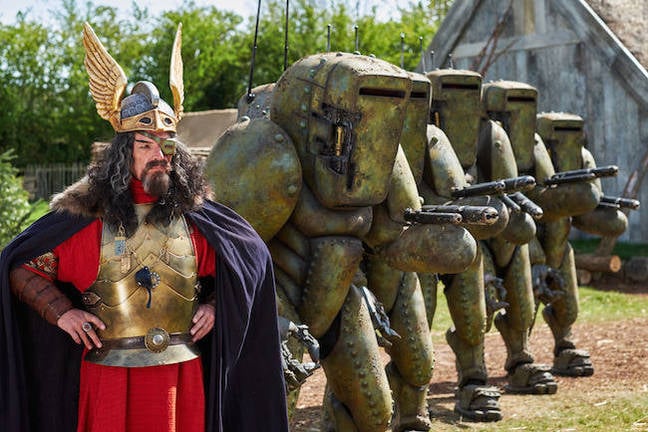 Doctor Who, Season 9 – The Girl Who Died. Pic credit: BBC

More intriguingly, we have the Doctor remembering a face in the wrong direction. And it's this jog of the ol' noggin that neatly explains why we've seen the Doctor's face before.

Peter Capaldi appeared as different characters in Doctor Who, prior to climbing into his DMs to go all timey-wimey on us.

He played Caecilius in the Season Four episode, The Fires of Pompeii (starring David Tennant as the Doctor), and it's this face that we see once again in The Girl Who Died.

(Does this mean Capaldi's turn as John Frobisher in no less than five eps of Torchwood will also be explained? We'll have to wait and see.)

It's only after Ashildr's death that the Doctor feels remorseful. "I plugged her into the machine, used her up like a battery," he tells us – having reversed the polarity of the neutron flow in one of the baddies' helmets, before plonking it on Ashildr's head to help combat the Mire with tech trickery.

"It’s all too easy to feed in a new reality," the Time Lord says.

So what is it with the Doctor's face? We're chucked back to a line from assistant Donna: "Just save someone, not the whole town."

But by saving Ashildr with the use of the Mire's medical kit, the Doctor creates a hybrid and the young warrior now has a little bit of alien in her.

Worth pointing out, too, that this isn't the first time we've heard the word "hybrid" used in this season of Doctor Who.

Bring on the next ep, I can't wait to see the tidal wave in full effect.