Boffins on the eternal hunt for more capacity for the Internet's backbones have hit on the idea of combining MIMO-like techniques with the more exotic trick of “twisting” light signals.

Optical researchers have known for a while that the multiple paths light can take within a multi-mode optical fibre should be usable for multiplexing – just like multiple paths can be used to expand radio waves' carrying capacity.

The problem is that unlike your WiFi router's multi-in, multi-out (MIMO) antennas, the multiple paths inside a fibre are very close together – and therefore hard to distinguish from each other.

Now, a bunch of researchers led by the University of Southern California's Hao Huang and Alan Willner has untangled different multimode spatial modes by adding a “twist” to the beams in different modes.

Their work is published in the Nature open-access journal Scientific Reports.

The "twist" creates what their paper calls a “mode sorter” that lets multiple signals at the same wavelength be multiplexed and demultiplexed in a link using multimode fibre. 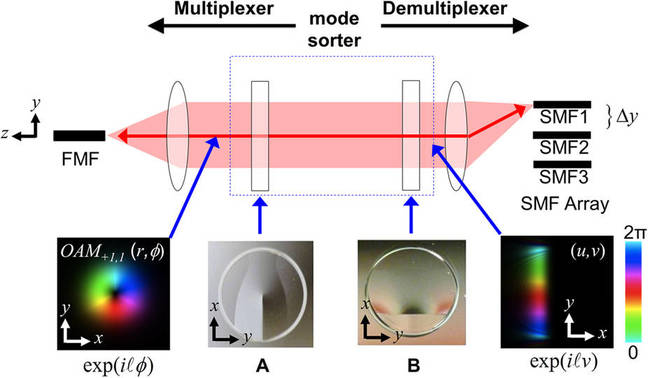 A couple of custom refractive elements (A and B) are all the researchers need to distinguish two signals encoded with orbital angular momentum (OAM). Source: Scientific Reports

By using OAM to distinguish two signals following different paths in the fibre, the researchers reckon, they were also able to demux the signals without needing cascaded beam splitters.

Their experiment showed that two 20 Gbps QPSK signals could be carried on each data channel over a 5km fibre link, and successfully retrieved.

The insertion loss imposed by each beam splitter caps how many different modes could be used in mode-based multiplexing.

To combat crosstalk between channels, the researchers also used MIMO techniques in their digital signal processing, achieving a bit-error-rate of 2 x 10-3 with a <1.5 dB power loss.