US senators lean on ICANN, tell it to quit squirming and open up

Two leading US senators have warned domain name overseer ICANN to stop resisting accountability changes in return for control over the internet's DNS.

John Thune, chairman of the Senate Committee on Commerce, Science, and Technology, and ranking member Brian Schatz signed a letter [PDF] warning that without "significant accountability reforms that empower the community," Congress will not support the transition of the IANA contract from the US government to ICANN.

"In legislation, letters, and hearings, we have called for robust accountability reforms to ICANN as a necessary pre-condition to any possible lANA transition," it notes. "Our support for these reforms has not wavered."

Thune and Schatz were cosponsors of the recent Dotcom Act that gives Congress a 30-day review window of the transition plan. As such, Congress will have final say over the move.

The reason for the letter is that after a year of work by an internet community working group, the ICANN Board has refused to accept its core recommendation: that the internet community be given a legal right to direct the organization under specific circumstances.

Instead, the Board has heavily pushed its own alternative of putting future disputes through an ICANN-controlled arbitration process under which the Board would be expected, though not obliged, to follow the result.

That approach angered many in the internet community who pointed out that the Board's efforts to maintain its absolute authority were a clear indicator of why there needed to be a legal right to overrule it.

Which side you on?

The letter from Congressmen Thune and Schatz makes it clear on which side they stand: "We understand the Cross Community Working Group on Enhancing ICANN Accountability has been diligently developing such a package of reforms to ensure that the stakeholder community can exercise the stewardship role historically played by NTIA. Significant accountability reforms that empower the community and are developed by the community are necessary for Congressional support of any such transition."

Their letter follows a similar one sent by European governments and registry operators two weeks ago which noted: "The requirements set forth by the proposals from the CWG and ICG groups [the two community groups working on the IANA transition] can only be met if implemented by credible, enforceable powers in the ultimate interest of all stakeholder groups."

That reference to "credible, enforceable powers" gets back to the same point: which model is introduced to make sure that ICANN cannot continue to put off real reforms into its accountability and transparency, as it has done now for over a decade, and which has led to the organization being compared to football organization FIFA.

ICANN's resistance to losing absolute control has been fierce. The organization's legal team has developed and commissioned a series of legal opinions, only some of which have been made public, that paint the proposed changes in the most catastrophic terms.

An early memo argued that any proposal that gave the internet community the right to force the Board to act was in fact illegal. That assertion was struck down when it was revealed ICANN's lawyers had simply chosen to ignore a key part of California corporate law.

A later memo argued that giving the community the collective power to force the Board to act risked giving a small group of people the ability to dissolve the organization altogether. That argument was also swiftly dismissed.

And then in a spreadsheet produced by ICANN's staff, the argument was made that if the transition didn't occur next year, the organization itself would be torn apart and the internet could be taken over by the United Nations.

Such over-the-top efforts have also been made by ICANN Board members. Chair Steve Crocker refused to accept the "single member" model, implying he would rather stay under US government control than sign up to it. Then in an effort to strengthen his hand, he also refused to accept the weaker "designator model."

Unfortunately for Crocker, a legal analysis done by the working group's independent lawyers revealed that ICANN currently runs under a designator model. So the chair of the organization was in fact refusing to accept his own organization's governance model.

Adding to the sense of farce, Crocker – who has been on the ICANN Board for 14 of its 17 years – and vice-chair Bruce Tonkin then argued that the overseer's supporting organization and advisory committees should not be given a legal right to challenge their decisions because they were not sufficiently representative of the internet community.

That claim led to others pointing out that the Board itself was chosen by the exact same community, and so they were in effect arguing against their own legitimacy.

A third Board member, Chris Disspain, has also been forcefully resisting the change by trying to pick holes in every recommendation while claiming to support its overall goals. His interventions alone have led to dozens of legal opinions and responses for the working group's lawyers. Disspain is expected to take over as ICANN chair when Crocker is obliged to step down in 2016. 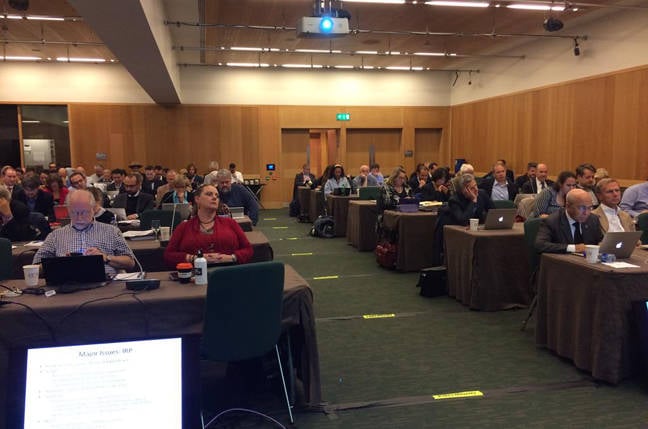 The accountability working group hard at work in Dublin

Next page: What's going on this week
Page: