If you think your IT role is demanding, imagine needing to do a major install every couple of weeks. You only have a day to do it, you can't visit the site before, and it may be in incredibly hot, wet or dusty conditions.

What you install has to deal with huge quantities of data and be 100 per cent reliable. Nine nines is not good enough.

Then, a week later, you take it all down again.

That's the requirement for part of the 470-strong crew at Lotus F1. In addition to the bits which go out to the track, there is the computing power necessary to work with a wind tunnel, simulator and 33 teraflops of complex fluid dynamics processing.

It's not just the cars – the whole Formula 1 industry runs at high speed. It takes around 10,000 drawings to detail an F1 car for the start of the season. During the season another 15,000 will be produced. Lotus estimates that there is a material change to the car every seven minutes during the season.

Most F1 sponsorship uses the cars as high-speed advertising billboards. Red Bull might give you wings but having the logo on the car won't make it go any faster. The relationship between Lotus F1 and its IT suppliers, however, is absolutely about making the car go faster. There might be EMC and Microsoft logos on the car, but there is also a bi-directional technology relationship between Lotus F1 and those companies.

The team is closer to its IT suppliers than it is to the separate road-car company with which it shares its name. Indeed, the walls of the Enstone offices, which show off its heritage, are bedecked with the team's Renault and Benetton predecessors – not the Lotus 79 of Ronnie Peterson or Graham Hill in a Lotus 49. 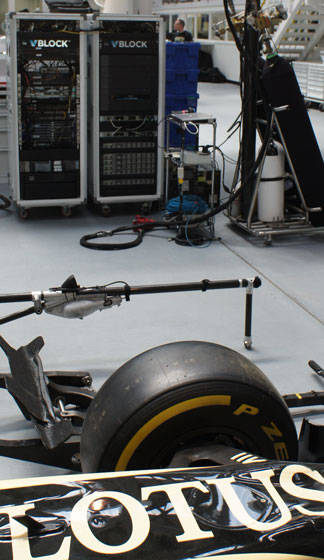 EMC supplies all of the Lotus computer systems

The front-line computer systems are VCE Vblocks. These come ready to run with systems built by Cisco, EMC and VMware on a Windows platform, running on Intel Xeons. Systems power up and down as needed to reduce the need for cooling. There is diskless boot off the shared storage.

One Vblock travels around the world to every F1 race or test. For fly-away races they are installed in the pit garages, while for the races where the support vehicles are driven to the tracks – the European races – the Vblocks have the pampered luxury of being in an air-conditioned truck. Unfortunately, the most arduous conditions are usually in the fly-away races. The kit nevertheless has to work, faultlessly, in the 38°C heat of the dusty, un-air-conditioned Bahrain garages and elsewhere. The hardware is completely standard apart from the odd military-spec connectors for the pre-made wiring looms.

Fifteen systems were consolidated into two Vblocks, which meant 16 racks could be decommissioned and peak performance doubled to 70,000 IOPs.

I visited Lotus between the Canadian and Austrian Grand Prix earlier this year. One problem posed by Canada was a huge amount of pollen floating around the circuit. Lotus added extra filter materials to the racks but was happy that the fans could cope with the reduced airflow and still keep the systems cool. 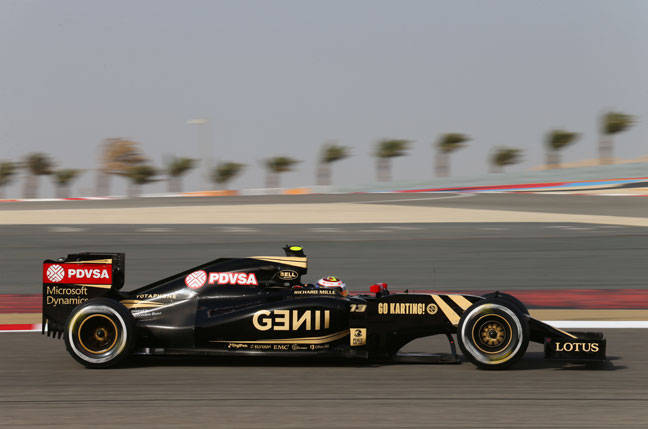 IT needs to run faultlessly in hot and dusty conditions in Bahrain, as well as at cooler European races

Next page: Failure is not an option
Page: