But you won't see stars through it, warns space agency 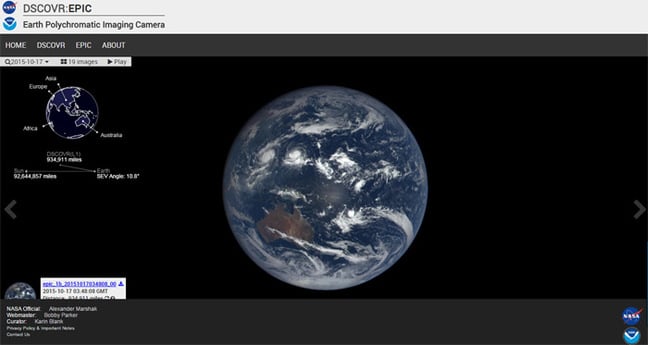 From a distance of roughly 1.5 million kilometres, at the L1 Lagrange point between the Earth and the Sun, the spacecraft's Earth Polychromatic Imaging Camera (EPIC) will deliver "at least a dozen new colour images of Earth acquired from 12 to 36 hours earlier".

EPIC packs an 11.8-inch (30-centimetre) telescope and 2048 x 2048 (four megapixel) CCD detector, which capture data in 10 wavelengths ranging from the ultraviolet to near-infrared.

For the visible light portraits, three separate red, green and blue wavelength images are combined to create a fetching portrait.

DSCOVR project scientist Adam Szabo said of the snaps: "The effective resolution of the DSCOVR EPIC camera is somewhere between 6.2 and 9.4 miles (10 and 15 kilometers)."

To pre-empt objections that there are no stars visible in the photos, NASA notes: "Since Earth is extremely bright in the darkness of space, EPIC has to take very short exposure images (20-100 milliseconds). The much fainter stars are not visible in the background as a result of the short exposure times."

Just how bright our Blue Marble is was demonstrated back in August, when EPIC caught a surprisingly dull Moon transiting Earth. Szabo said: "Our planet is a truly brilliant object in dark space compared to the lunar surface."

The primary objective of the DSCOVR mission, which launched back in February, is "to maintain the nation's real-time solar wind monitoring capabilities". To do this, its instruments monitor the solar's wind's "velocity, distribution and magnetic field", in the process offering "a 15-60 min lead time on geomagnetic storm warnings". ®