Pity the latest planet spotted by NASA's K2 (the re-birthed Kepler) mission: boiled by starlight from its host, WD 1145+017, and racked by gravity, it's only got a million years left.

The planet, about the size of Ceres and circling a star shrunk down to roughly Earth-size, is already followed by so much debris that Harvard-Smithsonian Centre for Astrophysics graduate student spotted an odd asymmetry in the characteristic “dimming” that identifies exoplanets.

Having already survived WD 1145+017's red-giant phase, the planet whips around the white dwarf in a breakneck 4.5 hours. The star is so small the passing planet dims it by around 40 per cent.

That provided the characteristic transit dimming that Kepler's designed to spot – but as lead author of this paper at Nature, graduate student Andrew Vanderburg of the Harvard-Smithsonian Center for Astrophysics explains, the shape of the light curve didn't match a planet.

“The shape and changing depth of the transit were undeniable signatures”, NASA's release quotes Vanderburg here.

Rather than the neat U-shaped dip of an undamaged planet, the wreckage circling WD 1145+017 produces an asymmetric slope, suggestive of a trail of debris (rather like a comet's tail, only much bigger). 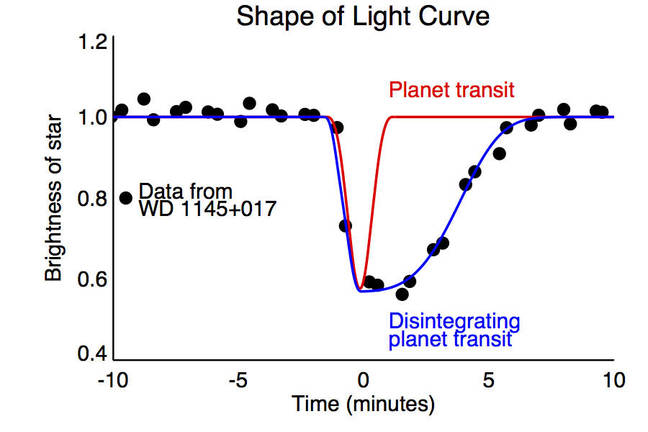 As well as Kepler, Vanderburg and his co-authors made extra measurements on the 1.2-meter and MINERVA telescopes at Whipple Observatory, the MMT, MEarth-South, and Keck.

Their observations also found heavy elements polluting the atmosphere of the star – stuff like calcium, silicon, magnesium and iron – instead of a chemically pure surface of hydrogen and helium.

Astro-boffins have long suspected that such pollution is leftover from planets that white dwarfs have consumed, and K2 and NASA Ames research scientist Fergal Mullally says the WD 1145+017 could provide a “smoking gun”. ®