Joining the illuminati? Just how bright can a smart bulb really be?

Review There's no getting away from it: talking about a smart light bulb is liable to subject you to immediate mockery.

Oh really? It's smart enough to turn itself on and off? Anything else? No? Okay, I think I'll just keep using my fingers then.

The image of someone pulling out their phone to turn on a lamp is ludicrous and here's why: because almost every time you want to turn on a light, it's because you are physically standing within several feet of it. And so is the switch. As such, the smart light bulb looks a lot like a solution looking for a problem.

Turn that question around however and ask yourself: under what circumstances would I want to turn a light on when I am not standing next to it?

The people behind BeON light bulbs seemingly did just that and then tried to fit every possible use case in a single product. By all accounts, they have done a fine job.

Here are the things that a "smarter" bulb can do:

So far that's the list, but if put together creatively it does allow for interesting use cases. These are the best in order of usefulness:

Welcome home: When you arrive home, you can open up the BeON app on your phone, hit a button on the homescreen and all the bulbs you have selected come on.

This is something that people have enjoyed for a long time, typically by using motion detectors. When it is dark and you get home it can be very comforting to have a light come on. It can light your way, making it easier to find the keyhole and ensure no one is lurking in the shadows. With BeON you can extend this into your home, so you don't have to go straight to the nearest switch when you get inside.

That is a lovely feature but clearly not worth the $199 for three lightbulbs that BeON is asking for. For $200, people are still going to use their fingers.

Away security lighting: We've all done it – when you go on holiday, you stick one of those round timers into the socket and then plug in a lamp. You figure out when you want the light to turn on and off and then pull out the little bits of plastic to match that time. If you're really fancy you have two or three and put them on slightly different times to mimic people moving around the house.

It's a simple truth that burglars are far less likely to try to break into a house that has lights on.

BeON has taken that extremely common piece of home security and moved it into the internet era. You install the lightbulbs into your sockets and treat them as normal bulbs. Turn them on when you want light; turn them off when you don't. The bulbs then "learn" that behavior, taking each day as a reference and even averaging a few Mondays together to come up with a typical Monday (and Sunday and Wednesday etc). It will also move with the seasons, turning on earlier in the winter, later in the summer etc.

If you then want to put on security lighting when you are out, you hit that option on your phone app and the bulbs will follow your real-life pattern, moving from room to room, back and forth, exactly as you do when you are inside.

This is actually a pretty impressive feature. We tested it out over two weeks and found that it did work as advertised. It even disregarded daft tests we ran like turning a bulb on and off in rapid succession.

Doorbell response: Adding to this level of real-time security, you can also get your bulbs to respond to audio stimuli. In other words, react when the doorbell is pressed or your smoke alarm goes off.

It's a neat idea and we can confirm that it works and works consistently. It does have flaws though. You can only set 3-, 6- or 9-second intervals which may seem oddly consistent. And if you set it up to make it look as though someone is heading toward the door, you are setting up the expectation that they will actually open it.

Presumably, if a burglar has the balls to press a doorbell late at night, he is also prepared to come up with an excuse if that door is opened. When the door doesn't open despite lights coming on it may, ironically, reinforce his sense that nobody is home.

The ability to hear a smoke or fire alarm and turn lights on is self-explanatory. And hopefully not something that you would ever have to use. But useful if you did have to.

Stored charge: One of the useful aspects of these bulbs is the ability to store a charge so they can turn on without requiring the switch being pressed. This allows for the Welcome Home feature but it can also work if you have, say, a power cut.

What is an oddly pleasant feature is the ability to tell a bulb to fade slowly over roughly 10 seconds when you turn it off. You can select whether you want your bulb to do this (default is not) and it is invaluable for that last light bulb that you turn off before going to bed.

It's worth noting that the bulbs store up charge when they are physically turned on. This has two impacts: one, it means the bulbs aren't constantly tapping your current (which is good for your electricity bill) but it also means that installing the BeON bulbs in a light fixture that is rarely used, such as in an attic or boiler room for example, is not a great idea. It will run out of charge and drop off your network. 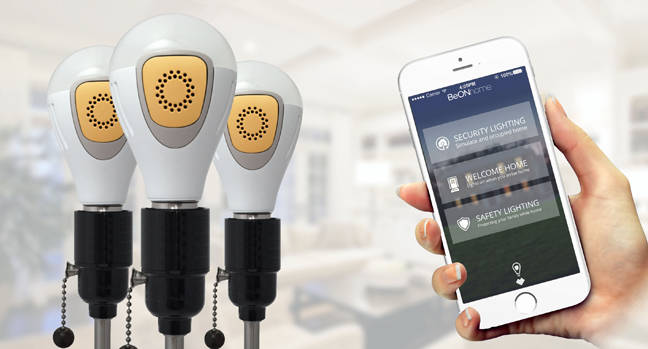 The BeON bulbs are the same size as normal bulbs. The app is well designed, and simple to use.

Next page: The bulbs themselves
Page: