A lost and forgotten piece of what was probably a rocket booster is set for a November 13 impact over the Indian Ocean, and it's got space boffins scrambling to make sure they capture the event.

The mystery object, WT1109F, has a very eccentric orbit that takes it out to twice the Earth-Moon distance, and observations since it was first discovered give it such a low mass that it's assumed to be hollow.

That, as Nature writes, makes it likely the one-to-two metre object is man-made: “a spent rocket stage or paneling shed by a recent Moon mission”, Nature suggests.

It's also possible that WT1109F dates back as far as the Apollo era.

Astronomers are keen to watch the show as closely as possible, because as well as checking the science that predicts its re-entry (around 65 km from the southern tip of Sri Lanka, at 0620 UTC on November 13), it provides a test for our ability to track objects that might pose a danger. 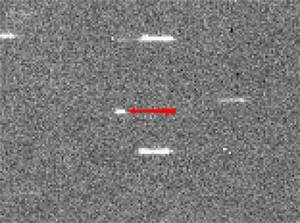 WT1190F as captured by the University of Hawaii 2.2m telescope

This object doesn't fall into that class: its relatively small size means most of it will provide a fireworks show as it burns up in the atmosphere, although one of the astronomers watching it, NASA Jet Propulsion Laboratory's Bill Gray, suggests he “would not necessarily want to be going fishing directly underneath it”.

WT1190F was first spotted by the Catalina Sky Survey in October, and its trajectory calculated using extra observations and archival sightings from 2012 and 2013. Nature says it's one of around 20 artificial objects we've spotted that are in distant orbits (as distinct from the veritable cloud of space junk that orbits close by).

Astronomers reckon the object was probably knocked into its current orbit – and put on its path to self-destruction – by the Sun's and Moon's gravity. ®