Execute R in the database for speedy analysis

Microsoft is releasing a new preview of SQL Server 2016, including integration with the R language for statistical analysis.

In April 2015, Microsoft completed the acquisition of Revolution Analytics, a commercial provider of software and services for the open source R language.

The new Community Tech Preview of SQL Server 2016, CTP3, integrates with the Revolution Analytics R package so you can run R analytics in the database, rather than pulling out data for analysis on a separate machine.

You can also execute R scripts via a system-stored procedure so you can query data, pass it to R, and get the results.

Another new feature in the latest preview is Transactional Replication from SQL Server to Azure SQL, where Azure SQL is Microsoft's cloud-hosted version of SQL Server. The idea is to make it easier to migrate data to the Azure service without downtime.

There are also improvements to in-memory OLTP (online transaction procession), the technology codenamed Hekaton, and to the Stretch database technology that archives historical data to Azure SQL transparently.

Another key feature in SQL Server 2016, already previewed in the May 2016 CTP2, is called Always Encrypted. This feature enables SQL Server to operate on encrypted data. The encryption key resides in the application, so that data is only decrypted locally. 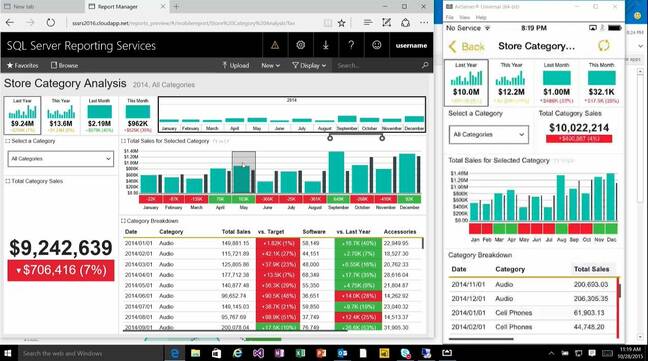 SQL Server Reporting Services (SSRS) has been revamped so that reports are formatted in responsive HTML5, for richer reports with better browser compatibility and mobile support.

Finally, Microsoft is talking up its Azure Data Lake repository and analytics service, designed for big data processing. The technology is built on Apache Hadoop and Apache YARN, the new generation of MapReduce for filtering and sorting large datasets.

The SQL Server 2016 release date is not yet announced, but note that SQL Server 2014 was completed in March 2014, so sometime in the first quarter of 2016 would not be a surprise.

The download for SQL Server 2016 is not available at the time of writing, but has been promised before the end of the SQL PASS Summit under way in Seattle. In due course you will find it here. ®