A tad buggy but plenty to like. Shame about the lack of market

Microsoft released build 10572 of Windows 10 Mobile last week, hot on the heels of build 10549, as the release date nears for the first Windows 10 smartphones, the Lumia 950 and 950XL, expected in November.

The company has not made it easy for Windows Insiders keeping up with the builds. Both 10549 and 10572 require first resetting your phone back to Windows Phone 8.1, which means double the effort.

The Windows Phone story is heartbreaking for its fans, with Microsoft first acquiring Nokia, the main device vendor, and then dismantling most of it, declaring a change of strategy. What the new strategy is has never been clearly articulated, but it seems to involve a retreat from the mainstream smartphone market. Microsoft phones will instead be ultra-portable PCs, aimed at business and productivity users, with the ability to connect to full-size displays, keyboard and mouse.

This feature, called Continuum, requires new hardware, even though Windows 10 Mobile will install on most existing Windows 8.1 devices. The reason seems to be lack of dual-display capability in existing hardware.

Existing devices, like the Lumia 830 on which this review is being typed, can connect wirelessly to full-size displays, but only with display mirroring, limiting the screen resolution. True Continuum displays different content on each screen. Therefore the forthcoming HD-500 Display Dock requires a Lumia 950 or 950XL.

Despite this limitation, there are features in this build that seem to be aimed at Continuum users. After connecting to an external display, there is an Advanced setting appears that only offers “Mirror what’s on my device”, but which would presumably have further options on new hardware. 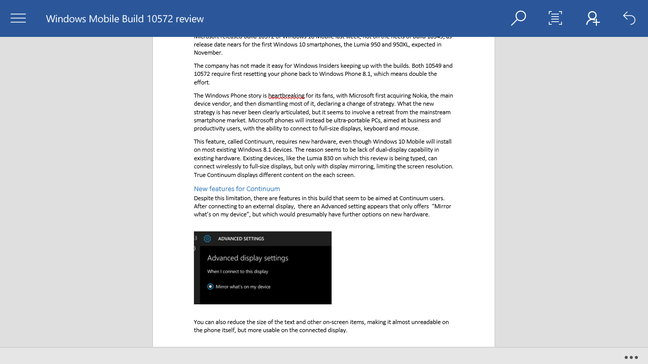 You can also reduce the size of the text and other on-screen items, making it almost unreadable on the phone itself, but more usable on the connected display. This makes it feasible to type a document in Word Mobile, though I cannot pretend it is a great experience. Connecting a Bluetooth mouse is no-go for me; the mouse works, but types random repeating characters as a side-effect. Without a mouse, it is fiddly to perform operations like taking a screenshot, inserting it into the document, and cropping it. I found myself looking forward to finishing the document on a real PC.

Another issue is power management. In full Windows 10, you can vary how quickly the screen goes off after inactivity, according to whether the device is on battery or external power. This is not possible in the current build, and screen time-outs are particularly annoying since the wireless display disconnects. 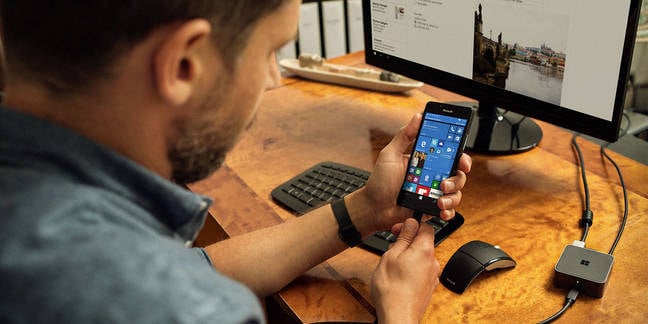 Continuum lets you connect to an external display with dual screens

Real Continuum will be a better experience, though no doubt there will still be annoyances. The open question here is how useful it will be. It only makes sense if you are travelling without a laptop or tablet, and to use it you will need keyboard, mouse and a display with either the Microsoft dock or wireless connectivity. It is unlikely to replace a PC since x86 applications will not run. It all sounds rather niche.

How is Windows 10 Mobile shaping up as a smartphone OS? It is usable though there is still occasional jerkiness on the Lumia 830 used for this review. There are several things to like. App navigation is excellent, with the Start menu available by swiping in from the right, and pinned tiles which support groups as well as multiple sizes. Cortana, Microsoft's digital assistant, makes more sense on a phone than on a PC, and works rather well, with decent voice recognition as well as handy features like reading incoming texts and accepting dictated replies, now fixed to be always on (as an option) rather than restricted to Bluetoooth audio. Give Cortana a sum to do, and a calculator appears embedded in the reply, another neat feature.

Next page: Integrating with Windows 10 on PCs
Page: