BAE Systems hops aboard, UK stumps up £60m. Now get this thing flying

The UK's Reaction Engines Limited has announced a healthy injection of funds into the development of its revolutionary SABRE (Synergetic Air-Breathing Rocket Engine) power system.

The company has inked a deal with BAE Systems, which will "invest £20.6m in Reaction Engines to acquire 20 per cent of its share capital and also enter into a working partner relationship".

Furthermore, the UK government will stump up £60m in funding to get the engine off the drawing board and onto the test bench.

SABRE is a "combined cycle air-breathing rocket engine". From a standstill to Mach 5.5, it operates in jet mode, burning LH2 mixed with atmospheric air. It then transitions to a rocket mode, using LH2 and LOX to thunder to Mach 25.

Reaction Engines' proposed Skylon spaceplane will pack two SABRES, capable of lifting 15 tonnes to an altitude of 300km. The secret of this mighty capability is the engines' use of atmospheric oxygen during the first jet-powered phase, which removes the need to carry "over 250 tons of on-board oxidant on their way to orbit, and removes the necessity for massive throw-away first stages that are jettisoned once the oxidant they contain has been used up".

Simple enough on paper, but Reaction Engines notes: "In air-breathing mode, the air must be compressed to around 140 atmospheres before injection into the combustion chambers which raises its temperature so high that it would melt any known material."

"SABRE avoids this by first cooling the air using a pre-cooler heat exchanger until it is almost a liquid. Then a relatively conventional turbo compressor using jet engine technology can be used to compress the air to the required pressure."

As well as eying SABRE as a means of getting stuff into orbit, Reaction Engines is also proposing using the jet mode pre-cooling technology for a derivative Scimitar powerplant, "capable of sustained Mach 5 flight".

This offers the possibility of aircraft such as the LAPCAT (Long-term Advanced Propulsion Concepts and Technologies) A2 carrying 300 passengers from Brussels to Sydney (18,700km) in just 4.6 hours. 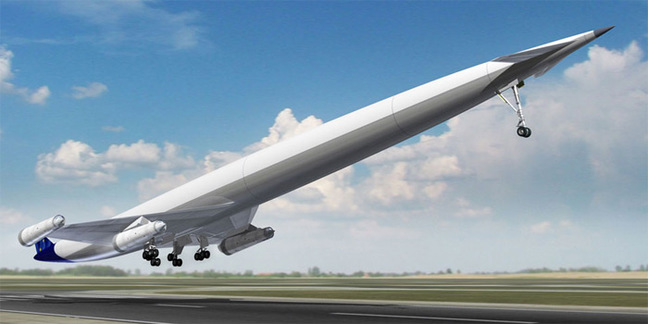 Press and punters love these kind of stats, but we're still a way off from jetting from London to New York in two hours.