'I posted winning race ticket in Facebook selfie ... and someone stole it!'

Photo An Australian woman says she lost out on AU$900 (US$643, £418) after someone lifted her winning race ticket from a Facebook photo.

Chantelle, whose last name was not given, said she won the money on 100-1 long-shot Prince of Penzance at Tuesday's Melbourne Cup horse race. Shortly after the race, the Perth woman snapped a selfie with her winning ticket and posted it to Facebook with the caption "Winner winner chicken dinner!!" 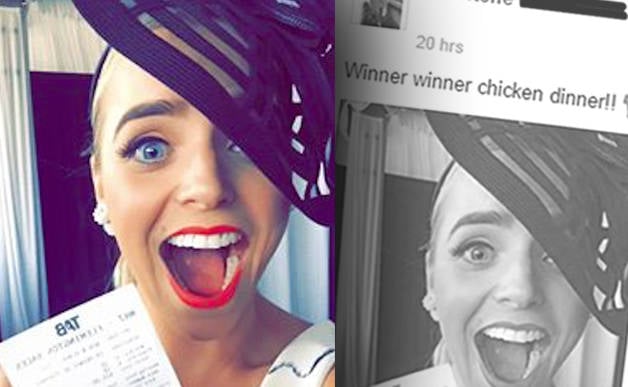 Shortly after, Chantelle told radio station Triple M 105.1, she went to cash in the ticket, only to find out it had already been claimed by someone else from an automated payout kiosk.

It seems someone on Facebook saw the image, complete with the ticket's details, and used the photo to claim the £420 in winnings from an automated cash machine by scanning the code from the snapshot.

The woman said she did not know who the culprit was that swiped her winnings, but said the photo was limited to Facebook friends. She is, understandably, considering a major cull of her friend list on the social networking site. She also told the radio station that police were investigating the theft.

Let this be a lesson to would-be gamblers with a penchant for oversharing: wait until after you've cashed in to post your bragging selfies, or at least cover up the barcode. ®