Condi Rice, ICANN, and millions paid to lobby the US govt for total internet control 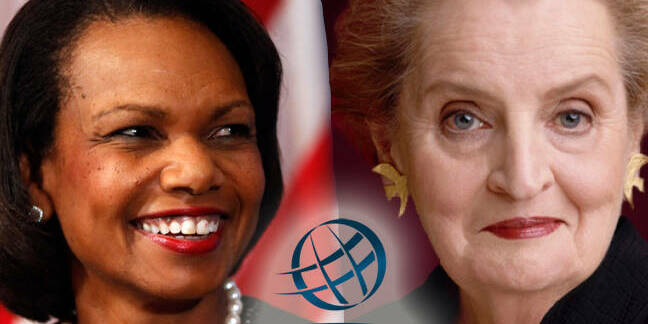 Special report Just minutes after the board of internet overseer ICANN applauded the results of a review into its accountability – announced at a public meeting in Dublin – the mood soured.

An accountability working group – tasked with making ICANN answerable to the wider public – had decided, following months of pressure from ICANN, not to push ahead with a plan that would have given the internet community a seat at the boardroom table.

As ICANN prepares to fully take over the highest levels of the internet from the US government, being able to hold the organization and its board to account is crucial.

For months, ICANN's staff had come up with a long list of reasons why the working group's "member model" was dangerous, including a much-derided claim that it would lead to the United Nations taking over the internet.

The model would give a small group of people too much power, the DNS overlord warned. It could lead to the dissolution of the entire organization. It would drag ICANN through the courts.

So when the community decided to avoid a head-on confrontation with ICANN, it came as a relief to many. The decision not to proceed with the member model received a standing ovation.

However, what was not highlighted in that move away from a legal right of the community to determine the organization's actions – but which was foremost in the organization's mind – was the fact that ICANN could continue to spend millions of dollars it receives from internet users, registry operators, and domain name sellers in ways it sees fit while having to provide only the barest details of what that money was spent on.

While the board and staff were greatly relieved, the next question highlighted the problem of a lack of financial accountability.

Why this all matters

The domain name overseer is due to take full control of the world's DNS, global IP address allocation, and communications protocols from the US government at the end of September 2016.

As a part of that transition, the internet community insisted that ICANN's notoriously poor accountability be improved. In the interest of time, a special working group focused on introducing high-level systems that would then enable future changes to be made.

Key among them was the inclusion of the internet community as a "member" of the organization, which would give it the legal right to force ICANN to act. That recommendation was fiercely resisted by ICANN itself, which argued instead for an arbitration system.

In order to reach agreement in time for the September 2016 deadline, the internet community compromised by stepping away from the "member" approach with the hope that its other proposed new powers, including the ability to veto the organization's budget and to fire Board members, will be sufficient to force improvements in future.

During the public meeting, ICANN's CEO was asked why his organization had not disclosed the millions it has spent on a slew of former top US government officials, including former Secretaries of State Condoleezza Rice and Madeleine K. Albright, former National Security Advisor Stephen Hadley, and at least two former senior staffers at the US government's state and commerce departments.

No mention had been made of the organization hiring these high-profile individuals, despite a firm commitment to be as "open and transparent as possible." The money spent on them had only been alluded to in budget line items for "professional services."

These individuals and their companies would only have been hired to lobby the US government as part of the IANA transition – so why was the money spent on them not divulged?

The lobbying system in the US, almost all of it centered in Washington DC, is famous; sadly, often for all the wrong reasons.

Lobbyists are expected to formally register themselves as such and provide quarterly reports on who they paid, how much they paid them, for what, and who they spoke to in government while representing their interests. Likewise, companies that hire lobbyists are required by law to disclose their use of lobbyists, how much they paid them, and for what. All this information is made public and can be accessed relatively easily online.

Except that the system is broken and has been for some time.

Lobbying is broadly defined as "influencing politicians or public officials on a particular issue." However, under the US Lobbying Disclosure Act, you are only required to register as a lobbyist if you spend more than 20 per cent of your time lobbying for a single client.

Lobbying also covers only the US government; you can spend as much time as you like influencing other governments, and that does not count.

These rules mean that when former Senate Majority Leader Tom Daschle became a senior policy advisor in the government affairs division of global law firm DLA Piper, he did not register as a lobbyist, even though his entire job is to influence policymakers on specific issues for his firm's clients. Likewise former Speaker Newt Gingrich is considered an "historian" rather than a lobbyist.

Many full-time lobbyists avoid registering by declaring themselves "strategic advisors." In return for very healthy fees, they advise companies on who to talk to in Washington DC on certain issues and set up relevant meetings that they send other members of their firm to in order to do the actual face-to-face lobbying.

The system is so easily sidestepped that the American Bar Association recommended three years ago that the 20 per cent rule be removed, and there is even draft legislation to tackle the thorny issue – the Lobbyist Disclosure Enhancement Act.

There is some irony in the fact that those with the most lobbying power – former high-ranking officials in US administrations who are able to use their contacts to gain access to all parts of the political system – are not registered as lobbyists. If you really want the job done in DC these days, and are willing to pay the huge sums that it costs, then a registered lobbyist is not the way to go.

Unfortunately for the internet community, ICANN – a non-profit based in southern California – has decided that these loopholes present the perfect opportunity to quietly spend millions of dollars of internet community money on influencing political decision-making.

Next page: Even the guy from Fox thinks ICANN should get real
Page:
Tips and corrections
37 Comments