How to build a city fit for 50℃ heatwaves

How did our ancestors do it?

The Persian Gulf is already one of the hottest parts of the world, but by the end of the century increasing heat combined with intense humidity will make the region too hot for habitation, according to research published in Nature Climate Change.

Heating and air conditioning currently permit humans to live everywhere from Siberia to the Sahara. However the extreme heatwaves predicted for the Gulf, where temperatures will regularly hit 50℃ or even 60℃, will reach the limits of the thermal adaptation that buildings can provide.

Our ancestors lived without the sophisticated thermal control systems we typically use in modern buildings; they implicitly used different “bioclimatic designs”, such as natural ventilation or south-facing windows, and these skills are still valuable in many climates today. But the latest data suggest this will not be enough.

So is there a future for habitation in the hottest regions of the world? It seems mass migration is less likely than staying put and taking on the challenge. However figuring out how to live comfortably and sustainably while it’s hot enough to fry an egg on the sidewalk may provide a fillip for environmentally sensitive design and urban development throughout the world.

The climate is a problem but does offer some opportunities. The amount of sunshine available means there should be no shortage of solar electricity, though we need to develop efficient storage systems too. We could also take advantage of day-to-night ambient temperature variations using “thermal mass” techniques to even out temperature fluctuations. 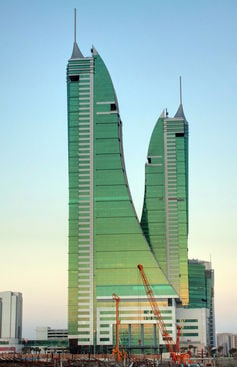 We will have to make significant changes to building design – highly glazed structures that soak up heat will become architectural dinosaurs. Traditional ideas from hot regions of the world will resurface: thick walls giving thermal stability (but enhanced with smarter materials such as composites with layers of insulation or perhaps embedded “phase-change” materials), used together with small windows. Building surfaces will need to be coated with smart materials that reflect heat gain – these already exist and researchers have looked at their perfomance in the hot summers of cities such as Athens.

We’ll need to optimise where and when we occupy buildings, to seek out the coolest spots and take advantage of less intense night time conditions. We may find ourselves living partly underground in order to benefit from lower and more stable temperatures to be found a few metres below the Earth’s surface.

In intense heat, finding some shade becomes essential. Buildings, streets, services and even entire transportation systems need to be entirely shaded or even fully underground. Some of these features are already showcased in the Masdar City development in Abu Dhabi, though the project (which had significant design input from Norman Foster and partners) is not yet fully operational.

Switch on the air con industry

Expect an air conditioning boom. This will cost a lot both to build and to operate, and we’ll have to come up with systems specially designed for extreme temperatures. The thermodynamics of current designs which rely on temperature differences between heat absorption and heat rejection mean it would be very difficult to achieve sufficient and efficient heat removal as these change and narrow.

One opportunity would be to use the Earth or the sea/rivers as “heat sinks”, rather than the external air, as these will be at lower temperatures and have the ability to absorb the heat, though perhaps with as yet unknown long term effects. It is also likely that air conditioning might most effectively be used during the night-time to pre-cool the building; night-time air temperatures will allow more efficient refrigeration.

Urban design and the ways in which cities are used at time of extreme heat will also need to be considered. Moving around outdoors without protection could become as unimaginable as walking unprotected from a polar research station in winter.

This obviously causes significant problems for those who must work outside: places of refuge may need to be constructed and the very act of building may need to be restricted to the “winter” (or rather slightly cooler) months. Construction products will also be obliged to change in order to cope with more extreme thermal stresses and expansion effects.

The shape of cities and the massing of their major buildings will change so that groupings offer a degree of self-protection. Streets will be designed to optimise shading and, when available, cooling air ventilation. The spaces between buildings will need to be carefully designed and uses (such as what might happen underground) considered alongside services provided to citizens. Shopping malls could be submerged and used as links between areas, just as the underground streets found in northern latitude cities like Montreal are used in winter.

Cities themselves may shift away from coastal to inland zones due to the problematic combination of high temperatures with high humidities near to water masses. In drier atmospheres, technologies such as evaporative cooling (in their simplest form fountains and water sprays) can be used to reduce temperature.

A technological alternative to this might be the use of moisture absorbing materials (regenerated desiccants) to dehumidify the atmosphere, but this would be a significant and complex task on the scale required. Moving whole cities can only be a long term plan but its something worth thinking about now, while there is time.