Video Pluto just keeps getting stranger: the latest speculation to arise from analysis of data gathered by New Horizons is that it might have ice volcanoes.

That's one possible explanation for put forward, in a press briefing at NASA's Ames Research Center in California, for the icy peaks that stunned the mission team back in July.

The tantalising possibility is that the informally-named Wright Mons and Piccard Mons are cryovolcanoes that once spread out a slurry of ices on Pluto's surface.

Just where the energy comes from to drive such activity is a mystery, because unlike Neptune's moon Triton (where cryovolcanoes were first observed in the solar system) there aren't processes like strong gravity at work to churn up the centre of Pluto.

As Smithsonian Magazine reports, Pluto's peaks are the largest summit depressions seen in the solar system. NASA scientist Oliver White is reported as saying “they are definitely weird, and volcanoes may be the least weird hypothesis at the moment”. 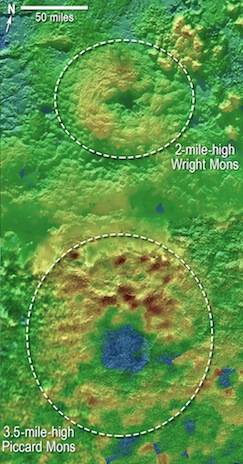 “These are big mountains with a large hole in their summit, and on Earth that generally means one thing -- a volcano. If they are volcanic, then the summit depression would likely have formed via collapse as material is erupted from underneath.

“The strange hummocky texture of the mountain flanks may represent volcanic flows of some sort that have traveled down from the summit region and onto the plains beyond, but why they are hummocky, and what they are made of, we don't yet know.”

White speculated that radioactive material in Pluto's centre provided the required energy, interacting with the dwarf planet's “relatively volatile” ices to make them ooze out of a cryovolcano.

The other surprise is that even given predictions that Pluto and its small moons would have messy orbits, they're much more chaotic than expected. NASA's provided an animation (below), which New Horizons team member Mark Showalter (author of the animation) described as “pandemonium”.

The discoveries are being discussed at the 47th Annual Meeting of the American Astronomical Society’s Division for Planetary Sciences in National Harbor, Maryland – which means there will almost certainly be more news to come. ®

Cloud Storage vs. On Premises Storage

Comparing the economics of on-premises object storage with public cloud for enterprise storage.