TalkTalk: Data was 'secure', erm, we beat rivals on price. Um, scratch that...

TalkTalk has withdrawn an advertisement from circulation that falsely claimed customers would save more money with the telco than with its rivals.

Malcolm Williams, a former customer of the telco, received an advert in the post from TalkTalk encouraging him to sign up to its broadband service.

Having left the telco after only one day due to his displeasure with their service, the eagle-eyed former customer noted that there was on the back a dodgy comparison of costs between TalkTalk, BT, Sky and Virgin Media.

"Upon closer inspection, the figures they quoted did not seem to add up, so I worked out the maths, and – lo and behold – the figures that they printed on the advert were vastly incorrect," Williams told The Register.

I sent an email to the commercial director of TalkTalk, pointing out the mistakes, and an hour later I received a phone call from a person high up in the analytics department of TalkTalk, confirming to me that indeed my figures were correct and the advert was in fact wrong.

The Advertising Standards Authority (ASA) confirmed to The Register that it had received a complaint about the TalkTalk leaflet which incorrectly featured a claim customers would save £476 with the data-spitting telco, as compared to rivals BT, Sky and Virgin.

ASA stated: "We're currently assessing the complaint to establish if there are grounds for further action." 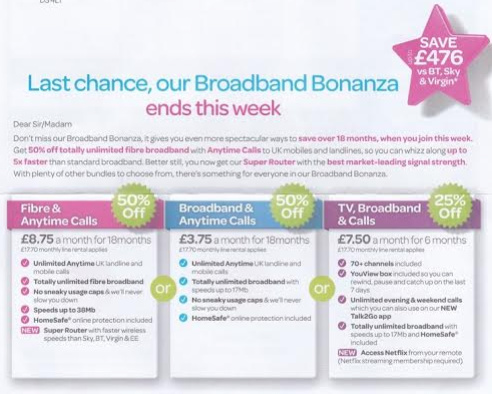 A spokesperson for TalkTalk told The Register that the company "would like to thank Mr Williams for bringing a mistake in a recent advertising campaign to our attention."

TalkTalk then admitted that: "While the small print had the correct breakdown of charges, one of the quoted savings was wrong. We stopped sending out the material as soon as the mistake was discovered, are liaising with the Advertising Standards Authority and are taking steps to make sure the same thing doesn't happen again." 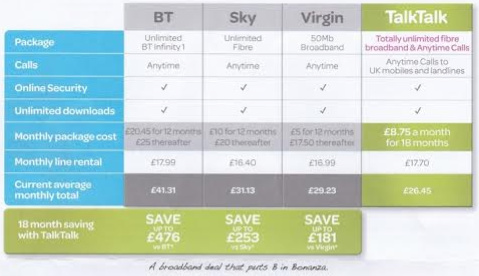 Williams noted that the executive he had spoken to on the phone had personally admitted to making a "mistake" on the calculations, and that there were actually five errors within the TalkTalk leaflet:

In addition to this complaint, ASA is also looking into a complaint about about an advertising promotion on TalkTalk's website.

We were informed that in this instance the complainant thought the pricing and T&Cs in the promotion were misleading. The ASA is currently assessing this complaint, as well as that of Williams, to establish if there are grounds for further action.

An ASA official told The Register that it normally takes around 10 days to decide whether or not a complaint requires further investigation. ®

If you've been affected by the TalkTalk hack, please contact us at: news@theregister.co.uk.

The Register has conducted an Incident Management Review of TalkTalk's contradictory statements following on from its most recent data breach.

Just when everyone thought things might be looking up, Dido Harding admits interest in top job at NHS England