Has the next generation of monolithic storage arrived?

Comment Infindat’s product is called Infinibox. It’s a monolithic storage system, or could even be called next generation monolithic, and competes against EMC VMAX, HDS VSP or 3PAR 10K.

It’s not all-flash. It’s hybrid, with lots of RAM and flash at the front-end and big 7200 RPM disks at the back-end, bringing a total usable capacity of 2PB per rack.

The product is designed to be resilient, and everything is N+1 (for example it has a particular three-controller configuration, unusual but very effective).

The first time I saw Infinidat’s Infinibox I thought about XIV; the two products have some design similarities, and, as far as I know, many engineers followed Infinidat founder Moshe Yanai in this new venture when he left IBM after disputes about the development of XIV.

Infinibox is available in two different models, which primarily differ in the number of disks at the back-end. The “mini” Infinibox could be a good system for mid size enterprises or DR sites as well.

The price tag is quite low for this kind of system, namely $1/GB. And, this is a unified system, with FC, iSCSI, NFS, SMB and object storage protocols already enabled and FiCON coming soon.

This allows Infinibox to be used for a considerably wide range of applications. Think about a bank; it wouldn’t be very comfortable putting its primary data in an Infinibox (Infinidat is just a startup after all!), but with a price point around $1/GB it could be perfect for storing a copy of a DB for analytics purposes.

And it could be even faster and denser than the primary storage system already in place.

Each single system is heavily tested for weeks before leaving Infinidat’s facilities for customer sites.

So, I was worried about the potential of Infinibox. The reality is though that it is indeed an interesting product based on solid technology, and for a lower price, which could be a real threat to traditional enterprise storage systems, such as EMC VMAX.®

If you want to know more about this topic, I’ll be presenting at the next TECHunplugged conference in Austin on 2/2/16.

Disclaimer: I was invited to this meeting by GestaltIT, who paid for my travel and accommodation. I have not been compensated for my time and am not obliged to blog. Furthermore, the content is not reviewed, approved or edited by any other person than the Juku team. 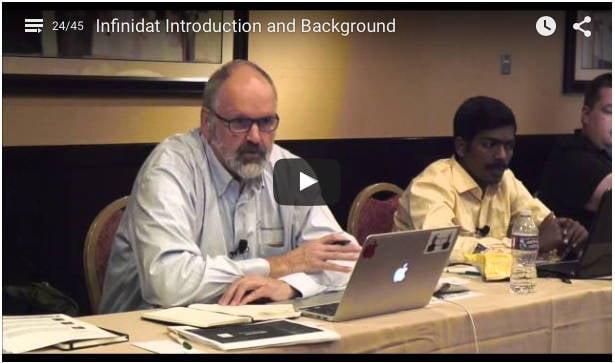