SC15 Uncle Sam's weather forecasters are going to use graphics processors to hopefully better predict the course of catastrophic storms.

The US government's NOAA agency will build a new computer system boosted by 760 Nvidia Pascal GPUs, according to Ian Buck, the chip company's veep of accelerated computing and CUDA inventor. When will this machine go online? Well, to give you a clue, Pascal is not due to arrive until 2016.

Today's weather-prediction models are programmed to run on general-purpose processors. Porting those workloads to run on parallel-processing number-crunching GPU chips should improve their horizontal resolution to 3km, Buck told us.

That means the GPU-accelerated models will cover the globe in grid points that are spaced 3km apart. NOAA's North American Mesoscale Forecast System has a 12km resolution, and its Global Forecast System (GFS) has a resolution of 28km.

A higher resolution means meteorologists can more accurately predict how, for example, a storm changes as it passes over sea and land, and thus where it will go and who is at risk.

Back in October 2012, NOAA got the path of Hurricane Sandy wrong – its GFS model reckoned Sandy would swerve away from the US – whereas the European Centre for Medium-Range Weather Forecasts (ECMWF) got it right, calculating America would take a direct hit. The superstorm killed 233 people and caused $75bn of damage as it barreled into the Caribbean, Bermuda, and the east coast of the United States. 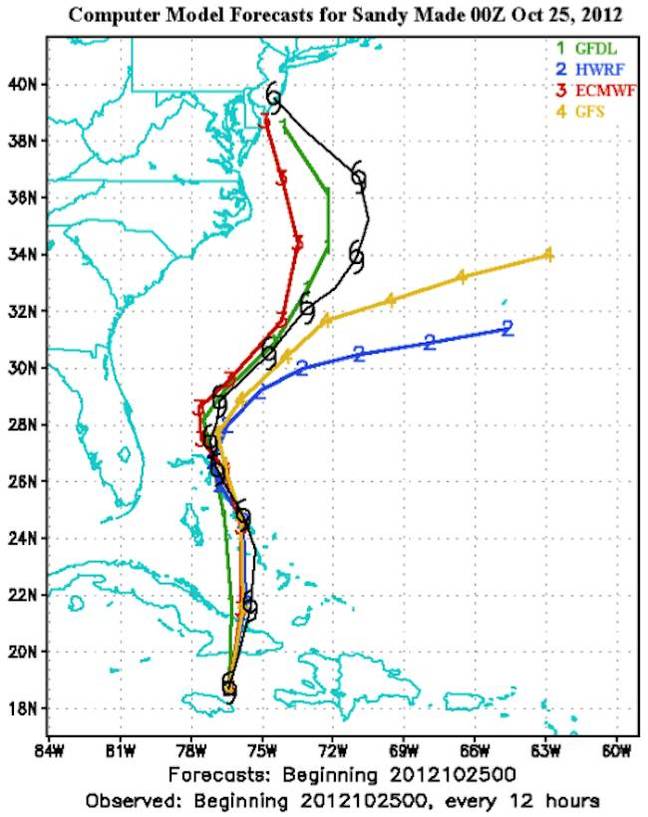 Model behavior ... How the ECMWF (labeled 3 and in red) system correctly predicted the path of Hurricane Sandy, and America's GFS (labeled 4 and yellow) got it badly wrong

The European meteorologists plotted the correct course for Sandy on October 23, a day after she formed, while NOAA's experts were way off. By October 26, preparations for a major storm were underway in America as wind and rain battered towns and cities. A day later, on the 27th, NOAA abandoned its model, and accepted Europe was right. Two days after that, on the 29th, the hurricane swung a left, making landfall on the US just as the ECMWF had envisioned.

That embarrassing cockup spurred NOAA into improving the resolution of its models to better forecast the path of storms and other weather patterns; the Nvidia upgrade is part of that, it appears.

NOAA is expected to announce its intention to build a GPU-based weather machine today to coincide with the Supercomputing 2015 conference in Austin, Texas. Check out our sister publication The Next Platform for in-depth coverage of the annual event. ®