Avere makes its FXT, a hardware and software multi-tier caching appliance, which accelerates on-premises filers, such as those from Isilon and NetApp. It can also be an on-premises front-end for files held in Amazon and Google clouds, enabling primary data stored in them to be cached on-premise and used to feed on-premises applications.

The clusterable vFXT software, called a Virtual Edge Filer, runs in a public cloud and caches data for compute instances running in that cloud. This data can come from files stored in those clouds or on-premises with the vFXT acting as a kind of reverse cloud storage gateway.

NFS and SMB and other protocols are supported. 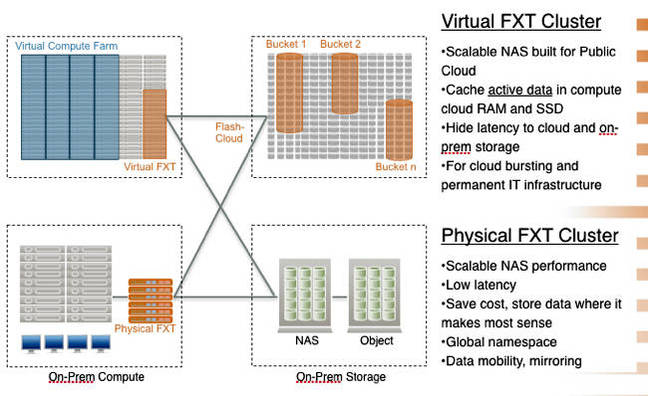 We’re told “In a matter of minutes, enterprises can deploy thousands of Azure HPC instances on-demand to crunch data with low latency and no data migration.” Data can be moved from the on-premises site to Azure using Avere’s FlashMove facility.

One more thing: it might be possible to have a vFXT in one cloud cache data from another cloud, for example have an Azure vFXT fetch data from AWS or Google to feed Azure compute instances. The FlashMove facility could also, we think, be used to migrate data from cloud to cloud, from Google to AWS, say, where it makes sense.