Symantec's salvation plan is more and better integration. No, really 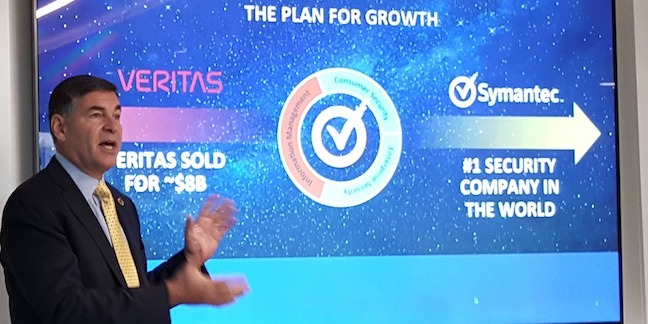 Symantec divested Veritas because it never quite convinced anyone that an integrated security and data management company made sense, and its security business has struggled in part because it's not linked its protection products. But the company's new CEO Michael Brown nonetheless thinks that integrating the company's range is the key to turning around Symantec's fortunes.

Brown appeared before the media in Sydney, Australia, today and said “Symantec is built on a lot of acquisitions, and we didn't have a history of making sure the products worked better than they did on their own.” This time around, Brown pledged, that will change and the company will get it right.

First up will be tools that correlate information about security collected at the endpoint, email and the network, to provide a multifaceted view of an enterprise Brown hopes represents intelligence about threats and actual attacks. That effort will be “key innovation in productivity for the folks who protect an environment.”

The first instalment of that strategy, a module for collecting data from endpoints, is due in December. Another 11 products are due to emerge over the 18 months Brown expects it will take Symantec to deliver its “unified security strategy.” Brown's making a big bet on it: he told The Register that the category Symantec wants to own is overall security intelligence, rather than a particular product.

Suits will get their own tools too. Brown said Symantec is working on a security analytics product called “Risk Insight” that will let executives face their boards with good answers to questions like “how safe are we?” This service will use data gathered from Symantec's endpoint security products and analyse it over time to produce a just-about-realtime report on the state of their security.

Today, Brown said, companies trying to assess the state of their security hire consultants to do so, but the expensive report they eventually receive is out of date before it is written. A near-realtime report, he hopes, makes Symantec's whole suite more valuable.

Brown thinks there were good signs in Symantec's recent results, as they showed upticks in enterprise sales after several declining quarters. The new CEO thinks that integrating products and providing better analytics are the key to success and that restoring a 30 per cent operating margin is doable.

Brown also addressed governments' calls for backdoors into products by saying that “as an open society we have to make tradeoffs” to balance security and privacy. The extent of those balances is, he said, “an open question.”

Symantec, the CEO said, will comply with the law as required. ®

You had one job ... and it wasn't letting test certs escape into the wild and then revoking them

Mozilla grants distrusted Symantec certs a stay of execution, claims many sites yet to make switch

Delay 'in the overall best interest' of Firefox users

Ding-dong. Who's there? Any marketing outfit willing to pay: Not content with giving cops access to doorbell cams, Ring also touts personal info

‘Spammy’ locale gets its wings clipped

Google to kill Symantec certs in Chrome 66, due in early 2018

This is how trust ends, not with a bang but with a whimper