Vulture @ the Wheel Oh, how car-makers like to mine their archive in the name of style. BMW’s Mini, VW’s Beetle, Fiat’s 500 ... all doff their caps to the style and nomenclature of an imaginary post-war automotive utopia. Citroën got in on the act back in 2010 with the resurrection of the DS marque.

A few months ago to celebrate the DS brand's 60th anniversary, PSA Peugeot Citroën took things a step further and dropped the Citroën name from the range and incorporated DS as a stand-alone legal entity. The new Citroën DS5 is thus actually the new DS5.

To be fair to Citroën, it isn’t just making cars that look a bit like its models of yore. The new DS models are unashamedly modern and devoid of retro flimflammery.

The question then is, can a mass-market car maker move 'up market' in Europe (in China DS Automobiles will have its own showrooms) just by boosting the style quotient and slapping on a funky badge?

Let's get that name out of the way first. What does DS mean? Well "DS" is pronounced "Déesse", which in French means goddess. That was what the name used to mean. But ask Citroën today and you'll be told it stands for Different Spirit. Surely that would be ED for Esprit Différent? Such are the homogeneous, pasteurised, anglo-centric days in which we live. Le Général would not, I suspect, approve. 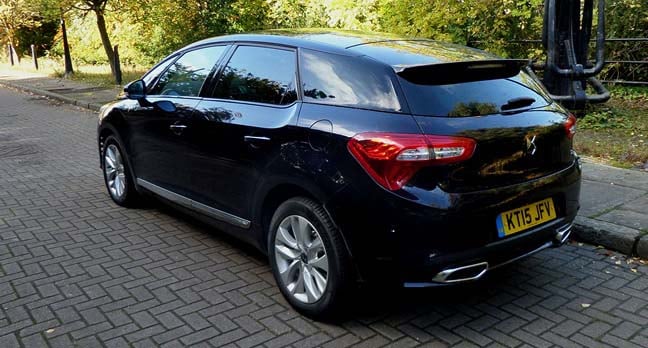 Turning from the word to the metal, the first thing that struck me when I walked up to the DS5 is that it is actually quite a small car. Many people assume it's a DS-ified version of the C5. It's not. The DS5 sits on the extended version of the PSA PF2 platform, which underpins such lacklustre models as the Peugeot 308 SW and Citroën Berlingo. The C5 sits on the larger PF3 platform.

That makes the DS5 something of an inbetweener. A little larger than a Ford Focus or VW Golf, a little smaller than a Mondeo or a Passat. While basically a five-door hatch, the shape of the DS5 is a curious sort of crossover/coupe/estate hybrid. It's the cab-forward design (just look at the sweep of those A-pillars) that has the effect of making the DS5 look bigger than it actually is from a distance.

The actual dimensions become more apparent when you climb inside. Snug is a good word for it. The broad centre console takes up a lot of room in the front, and the back is really only suitable for two passengers. If you are much over 5 foot 10 the raised centre cushion will take your noggin too close to the sloping roof for long-journey comfort. 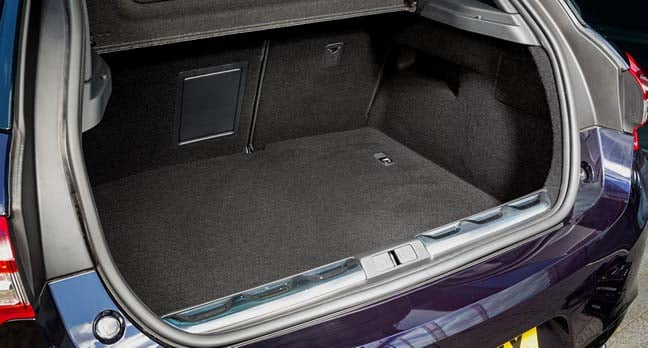 There’s a decent amount of luggage space though: 465 litres with the rear seats up and the parcel shelf in place. For comparison, a Ford Focus has 316L, a Mondeo 541L. The larger boot at the expense of rear legroom lends the DS5 a slightly GT-ish aura. An affordable car to drive to Marseilles for a long weekend with a lot of luggage in the boot and Isabelle Adjani in the passenger seat. 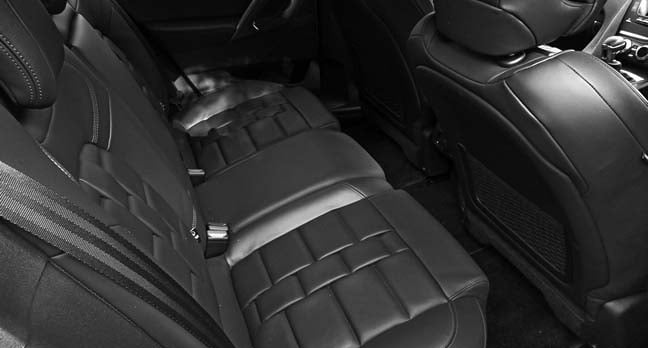 Compared with other 5-door hatches, it doesn't have a whole lot of rear legroom

Considering the workaday underpinnings the DS5 looks pretty sensational. The original model was arresting enough but the new car has some subtle exterior alterations to further separate it from the mass-market herd.

Most obviously you will now search in vain for a Citroën badge. From nose to tail all you can see are stylized chrome DS badges. 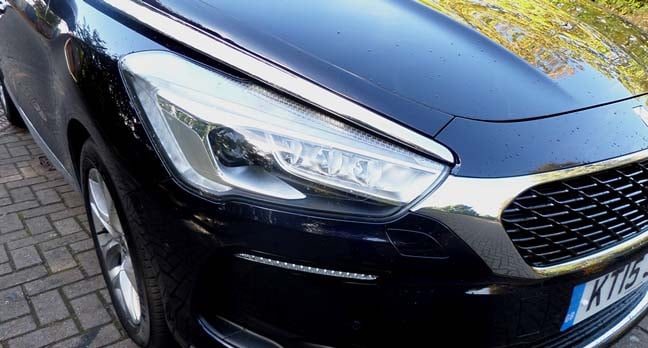 The nose is new too and features a vertical grille that will become a DS brand-signature. Elsewhere the chrome work has been expanded to accentuate the “sabres” that swoop up along each side of the bonnet. The LED lighting system has also been pepped up: when you activate the central locking the running lights and indicators do a whole Knight Rider routine that’s bright enough to be seen from low orbit let alone across a car park.

Some may bemoan that Citroën didn’t push the styling boat out further and give us something as radical as the Renault Avantime or Vel Satis, but neither of those models sold more than the handful and graphically demonstrated the perils of getting too far ahead of the curve of public acceptance.

That said, some of the metalwork is a bit fussy for my tastes. There’s a strange bit for panel curvature over the front wheel arches that when I first noticed it looked like a dent and sent me running around the car too see if the other side matched.