It's a tip of the open source hat today to a cat belonging to one Christoph Reiter, which recently discovered a bug in Linux desktop GNOME.

Christoph was running GS 3.18.1 in Debian sid when, for reasons likely related to the familiar "uninvited feline on keyboard" scenario, the following catastrophic sequence was initiated:

Christoph reported that while he expected "the slider thing going up an down in an endless loop", instead the end result was "after ~5 times the slider window coming and going GS crashes". 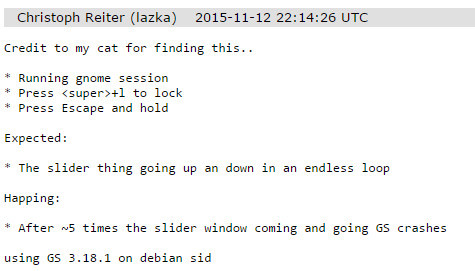 The matter was apparently resolved, although it's not clear if the cat had a paw in the fix. Readers with experience of parrots debugging Windows, or pet hamsters sniffing out potentially fatal Flash vulnerabilities are invited to share. ®

Nothing to see here, insists browser-maker