Acquisitions finally being developed and put to use

Comment NetApp, the company usually known for its FAS appliances, is putting a lot of effort into making its object storage platform, StorageGRID, more competitive. And it’s coming around to what I’ve been saying for a long time now: end users need “Flash & Trash” or, put more professionally, a two-tier storage strategy.

Previously, I’ve been very skeptical about NetApp's product strategy with ONTAP everywhere and the unified storage thing. It worked for a while, enabling NetApp’s success, but it’s no longer enough to cover all end-user needs.

I also have to say that I’ve praised many of its acquisitions, especially Bycast. They all seemed an attempt to enlarge the product portfolio, but the integration process itself, for the most part, did not lead to any favorable outcome, and the results were quite disappointing.

As in the case of Spinnaker, which has taken too long to become what it is today, due (maybe) to an ONTAP culture that's a little too strong. Fortunately, it seems things are quickly changing and NetApp is finally embracing a different, more open-minded, approach.

Bycast StorageGRID was one of those acquisitions. I blamed NetApp for not pushing it hard enough from the beginning, but now it's getting into gear and the product has become more competitive, with a list of features that can make object storage easier to adopt and deploy in any type of IT organisation. 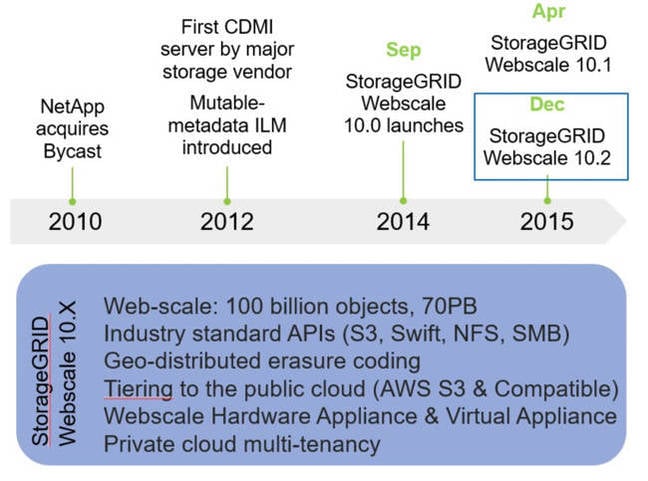 I recently wrote about one of the many use cases of object storage – private cloud storage deployments – but what is really decisive today is not the single use case, which could be considered the starting point, but rather giving the end user options, namely picking up what they need now while leaving the door open to other possibilities.

NetApp, and the StorageGRID team, are doing exactly that, building an ecosystem that pivots around an object storage core.

From my POV, the most interesting feature added to this 10.2 software release is the NAS bridge option. It is interesting to note that 10.2 comes just six months after the 10.1 release, confirming a very fast six-month release cycle. It adds to other crucial improvements like global erasure coding, AD compatibility, S3-tiering, improved multi-tenancy and S3/Swift APIs.

The implementation of this NAS Bridge is quite interesting because it is deployed as a VM. This means that, at the moment, the primary focus is not performance, but:

Last but not least, the NAS bridge is now part of StorageGRID and it comes for free, meaning 100 per cent freedom in architecture design for end users.

This solution goes hand in hand with AltaVault (cloud-based VTL) and makes the product family even more compelling for large IT organizations and service providers.

There are many takeaways from this story:

There are many projects starting now, in a range from a few hundred terabytes to few petabytes, where an appliance-based approach, cloud tiering, a robust ecosystem and integrations make the difference.

The latter is a much larger market segment which includes small/medium ISPs and mid/large enterprises as well. In this space, NetApp has cleverly joined vendors such as Caringo, Cloudian and HDS among others.

And I'd like to close with some wishful thinking. I know, it’s probably asking too much here, but I’d like to see more integration between ONTAP and StorageGRID. Features such as SnapVault for StorageGRID, for example, would make a lot of sense for NetApp end users.

Disclaimer: Just a reminder that I recently wrote a white paper for NetApp and it'll be sponsoring the TECHunplugged conference in Austin on 2 February, 2016. The content has not been reviewed, approved or edited by anyone else other than the Juku team.