Google has released Android Studio 2.0 Preview, a major update to its IDE for developing Android applications.

The feature was announced on Monday at the Android Developer Summit in Mountain View, Google's home town. Developers can download the new IDE here.

Android Studio is based on IntelliJ IDEA, a popular Java IDE. Google no longer recommends use of the Eclipse IDE.

In the new version, you can make code changes while an application is running in the Android emulator. Clicking Run will then deploy the new code immediately. The application then restarts using the new code.

Even if you are not using Instant Run, builds are faster in the new release, around 2 - 2.5 times faster according to Google. The Android emulator is also said to be faster, addressing a common developer complaint.

Another new feature is a GPU profiler, for optimising OpenGL ES (Open Graphics Library for Embedded Systems) code. You add a trace library to your project along with small piece of code to load the profiler. The profiler was demonstrated at the Summit along with warnings that it is in an experimental phase. 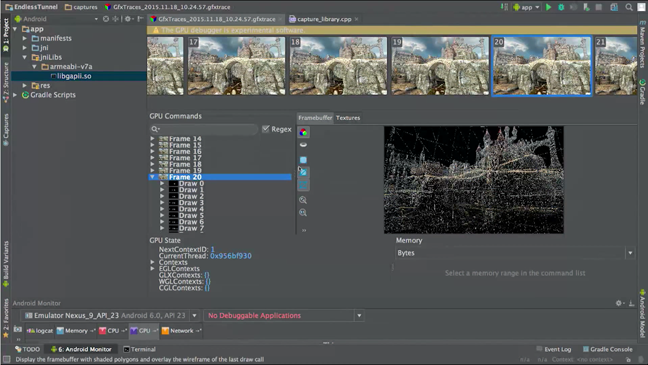 Another experimental feature shown at the Summit is the ability to step from Java code into C++ code during a debugging session. Android has both a Java SDK, and a native SDK for C and C++ developers, and the feature is useful for projects that mix the two.

Google is focusing on Android Studio as the main tool for Android development. "We used to have separate standalone tools. We're trying to put everything into the IDE," said Studio Tech Lead Tor Norbye at the Summit.®