Zuli pushes past the competition - but how useful is it really?

Review For reasons that continue to confound consumers, the two most popular areas for smart-home technologies right now are lightbulbs and plugs.

There are literally dozens of companies trying to do the electronic equivalent of designing a better mousetrap. Among the also-rans, there are a few that stand out, however.

We've already reviewed the BeON lightbulbs that actually manage to take something that doesn't need improving and add real value. Now it's the turn of the plug equivalent: Zuli.

Here's the biggest beef we have with so-called smartplugs: they stick out of the wall. You have to plug them in, and then plug something else into them. Whichever way you cut it, that's clunky. The Zuli is no different, although it does look a lot nicer that most smartplugs.

That aside, it's not easy to think of that many scenarios where having a "smart" plug is actually all that useful. Just as with a lightbulb, the only time you really want to use it is when you are standing right next to it. So why pay through the nose for something just because it connects to your phone?

The one scenario that may hold promise is, sadly, impractical: switching on a kettle. You could be in bed, or downstairs, or at your desk and decide you want a cup of tea or coffee. Being able to turn on a kettle and so shorten the amount of time it takes to make a cup could be useful.

Except it takes exactly one boil to realize a smartplug won't make this possible because it can't actually turn the kettle on - just the plug.

Now, you can turn the socket off, turn the kettle on, and then when you turn the socket on, get it going. But this works only once. It boils and switches off and then you have to reset it again. Here's betting someone has already created a kettle that gets around this issue but now you're buying a new kettle to work with your new plug. It's simply not worth it.

And so, in the perfect symbiotic relationship of worthlessness, most smartplug manufacturers envision that you will use them to turn on lights (which may or may not have smartbulbs in). All this trouble and expensive to replace your finger.

So why on earth are we reviewing the Zuli?

Well, because the team behind it – a mix of smart and energetic young people living and working in San Francisco's tech capital, SoMa – have come up with interesting add-ons to the basic on/off proposition.

Least interesting first: energy levels. The Zuli plug will give you a full rundown of the energy that has flowed through it and how long it has been on, plus an estimated cost. This is nice information to have. Maybe. If you really want to know the impact of leaving your TV on standby, you can. But it strikes us as a one-off kinda deal.

Next least interesting: control. You can turn a switch on and off using the accompanying app on your phone. Best case scenario: you're in bed and forgot to turn off the lamp on the other side of the room. Now, rather than get up and walk a few feet, you can pull out your phone and turn it off. Fun. But not worth $59.99 (yes, that's what each plug costs).

Just above that in usefulness is the ability to dim the light. Now, we can see people enjoying this aspect. Dimmers costs between $20 and $50 typically so for a little more you get your own dimmer. Downside: you have to use your phone to do the dimming rather than a slider on the actual light switch.

Next up: scheduling. You can set a schedule for your plug to turn on and off at certain times. Now these things cost from $5 to $30 in your typical hardware store but they can be fiddly - popping those little plastic tabs out or tapping buttons on a digital display.

The Zuli team have used the design simplicity that we all associate with smartphones these days to make scheduling simple and easy. So, assuming you have not installed smartbulbs that come with their own app to do this anyway, you have a useful feature.

Combined scheduling with dimming and the Zuli starts looking useful. If you go high-end on both, you end up at the same $60 price point. 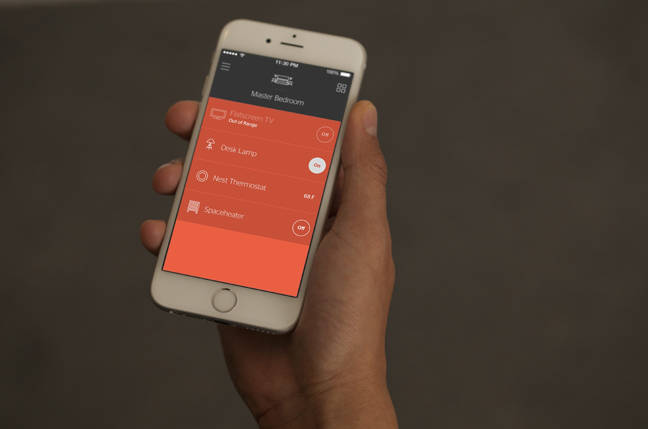 Turn it off and on again. The Zuli app is clean and simple.

And that's why the last and most useful feature of the Zuli pushes it over into the possible purchase list: presence.

The Zuli can tell if you are near it. And that means you can configure it to turn on when you a certain distance away and turn off when you move away. In other words, assuming you have your phone with you, the lights can turn on when you enter a room and turn off when you leave. A lot of people like this idea but can never be bothered to install a system that does it - motion detectors attached to light sockets. The Zuli makes that possible. And so, combined with dimming and scheduling, you suddenly have a useful product.

But there is a catch.

The technology that makes the presence aspect work is actually pretty impressive and is the one thing that makes the company and product stand out from the competition. But it does have flaws.

One is that it uses multiple Zuli plugs to figure out distances. In fact, you need a minimum of three and they triangulate to give an accurate understanding of where exactly your phone - and hence you - are standing in your home.

So to get presence working, you are going to have to stump up $159.99 to get three plugs. That's a little cheaper than buying three individually, but you are still paying over $50 a plug for some nice-to-haves.

The system - which uses your phone's Bluetooth and the plugs constantly pinging it and themselves - also means you need to configure it. The Zuli app walks you through the process. It takes a few minutes and requires you to turn in a circle and then walk around the room to help it makes sense of the space you want to be considered as part of the room.

We ran through this process repeatedly in different rooms in order to test its effectiveness and quickly discovered a couple of things about it:

These are limitations but if you are able to overcome them, then it does work as advertised. And it is pretty good. You walk into a room, the lamp switches on. You walk out, and it switches off according to pre-set time that you set (5, 10 or 15 minutes). We did notice that there is often a short delay in entering the room and the plug knowing you're there. It's not long - maybe three seconds maximum - but it is not perfect. Sometimes of course, the light comes on the very instant you walk in the room - and we have to admit, it is an oddly pleasing feeling.

There are two other issues though that mean, unfortunately, that the Zuli is not likely to become a permanent feature - in my household at least.

First, even though the system uses Bluetooth LE (low energy), that constant pinging takes a toll on your phone's battery. The longer you spend at home, the more battery usage it will suck up. When out the house all day, it averages - for this reviewer at least - two per cent background activity. When at home all day, it jumps to five to six per cent. And that's without you opening or using the app.

Just by comparison, five per cent battery usage is what you would expect the phone function on your phone to use on an average day (assuming five or so normal length conversations). It's far from a deal breaker, but it is much hungrier than you would hope for.

The bigger problem however is the fact that the Zuli system will only work with one phone and one person. If you try to log a second person onto your account, the first person will get booted out. And you can't set up two accounts to work with one plug. The company told us that multi-user support was coming "soon".

Due to its Bluetooth approach, it also means the app won't work unless you are within range of the plugs - good for privacy, not so good if you want to turn that light on when you are not at home.

What this means is that if you live with someone else, they will have to use your phone to carry out any of the functions - dimming etc. More annoyingly, it means that if you leave a room that they are in and have the presence setting on, the lights will turn off leaving them in the dark. Not exactly conducive to happy shared living.

So, as we find with all smart-home technologies, it is again a case of finding the technology that fits in with your lifestyle.

In the case of the Zuli, the sweet spot is a young person who lives by themselves in rented accommodation. Why rented? Because people who own their own houses tend to use portable lamps less. The Zuli won't work with wired-in lighting. Oh - and you need to be an iPhone user - the app only work on iOS at the moment.

If you live with other people, the usefulness drops off. If your house or apartment has more than two bedrooms, the usefulness will drop again. In effect, the Zuli team have created the perfect smartplug for themselves and fellow SoMA workers but if they want to reach beyond that narrow market, they need to expand its features.

Just a final note: another potential downside when it comes to Zuli is in where it fits with the broader smart-tech eco-systems that are being developed.

Despite being iOS driven, Zuli has decided not to go with Apple's HomeKit - at least not yet. Instead, the team told us when we visited their headquarters that they were more minded to join the Nest system. And in fact the Zuli app will connect to your Nest thermostat and let you extend the presence aspect of its plugs to the setting the temperature.

In conclusion then: this is good technology, neatly and elegantly packaged. If you live by yourself in a rented apartment and have $160 to spare, this is the best smartplug setup on the market. But it does have its limitations.

Hopefully the Zuli team will find enough customers that they are able to apply their significant design and engineering expertise to expanding their current products to fit the needs of other markets.

Three out of five. ®

A dimmer, timer and motion sensor in one. Some great technology with elegant design but limitations restrict it to single people living in small apartments.
Price: $59.99 RRP