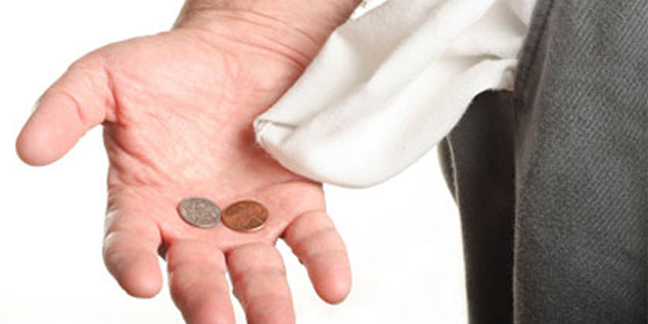 Hewlett Packard Enterprise has a risk and reward element hard wired into the 10-year cloudy infrastructure deal with Deutsche Bank and will lose money if things don’t go as planned, an exec has confirmed.

This is HPE putting its money where its mouth is in the multi-billion dollar deal it penned with the German financial institution in February that will see Deutsche use the Helion private cloud to buy bit barn services on demand.

The over-arching aim is to help Deutsche Bank cut costs and move to a modern and “agile technology", it revealed at the time of signing. It was a big deal for HP - now HPE - following several years of contract run-offs with large outsourcing Enterprise Services agreements not renewed.

Talking at Discover in London today, HP UK chief Andy Isherwood told an audience of journalists there is a risk and reward wrapped into the contract.

“We probably can’t go into all the details here but the structure of the Deutsche Bank deal… if we don’t execute effectively we’ll lose money,” he said.

“It's not just about selling them X amount of services; we are selling them an outcome. If you don’t deliver on that outcome, we’ll lose money on the contract,” he revealed.

He refused to provide details of the outcome.

HPE Financial Services played a role, “taking assets from their [Deutsche Bank’s] balance sheet into Hewlett Packard Enterprise”. This is all part of the "consumption-based pricing" included in the contract.

Isherwood said the utility model is flying, “the biggest issue is probably scaling it, making it really industrial because we are seeing a ton of demand.”

In October, Deutsche Bank revealed it is overhauling “excessively complex IT”, heavily virtualising the environment, moving to private cloud and slashing the jobs of 6k external consultants out of 30k in the move to digitisation. ®

ServiceMesh is still there. But the VSANs are landing to help an automation push

That critical VMware vuln allowed anyone on your network to create new admin users, no creds needed