Star Wars Battlefront: Is this the shooter you’re looking for?

Game Theory Battlefront is DICE's love letter to Star Wars fans. It's for all of us who grew up manually marching AT-ATs across the back garden, or making swooshing noises as we smashed our Luke and Vader figures together. 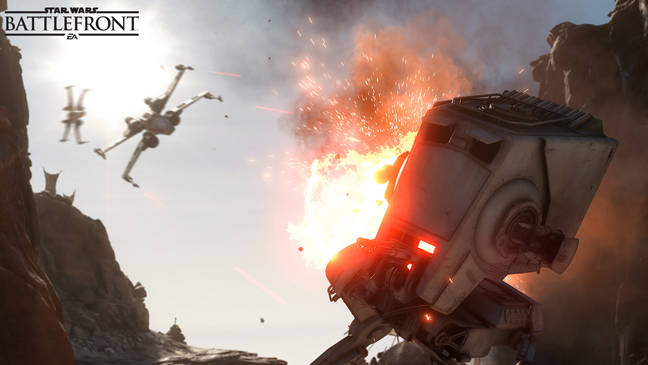 Every visual cue has been recreated in immaculate detail, from the rivets on a Stormtrooper's armour, to the configuration of buttons in an X-Wing and the '70s-era quiff of Han Solo's hair-do.

The sounds of Star Wars – the blasters, the comms chatter and that iconic soundtrack – have been translated with an equal amount of exacting quality too. At times it's best to simply stop and stare, as untold moments of the conflict between Rebel and Empire soldiers unravel before your eyes.

One recent match of Drop Zone, an eight-on-eight multiplayer mode where rival forces clash to capture and secure drop pods, was a perfect example. My team of Rebels had taken a drop pod and were holding position until we'd successfully captured it, while Stormtroopers poured into the locale in attempt to grab it for themselves. 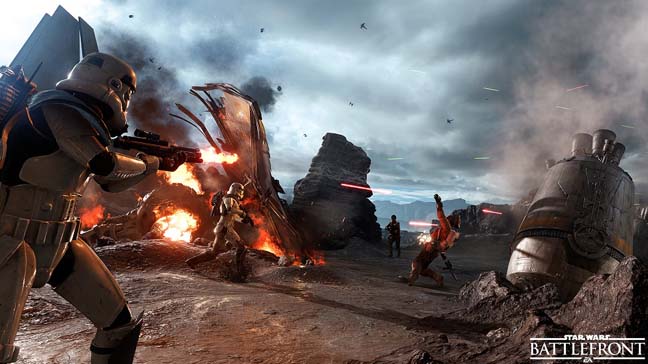 I was killed in the initial crossfire – life is cheap in Battlefront – but respawned and sprinted back to the frontlines. I arrived just in time to witness a huge scale firefight as Stormtroopers charged the dug-in Rebels. For that moment, as blaster fire flared on all sides and the music swelled, I was in Star Wars.

Unfortunately, for every perfect moment, there's an equal and opposite clanger that breaks the experience. Some of that comms chatter I mentioned can be badly timed, or completely at odds with what's happening on screen and sometimes the music wades in at strange times too.

Then there's the way on-field bonuses are delivered, with icons representing X-Wings, TIE-Fighters, AT-STs, one-use weapons or even Luke, Darth Vader, Han, Leia, Boba Fett and the Emperor, being scattered across on the ground. 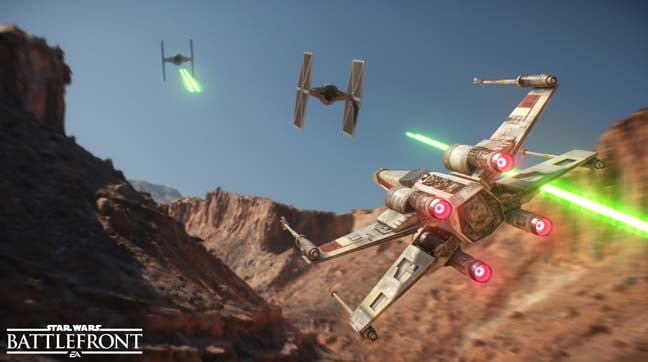 I suppose this method creates a way for newcomers and veterans to share these power ups. But surely there was a more satisfying way to do the same, than to simply strew these icons across maps like so many mushrooms and fire flowers in the Mushroom Kingdom. 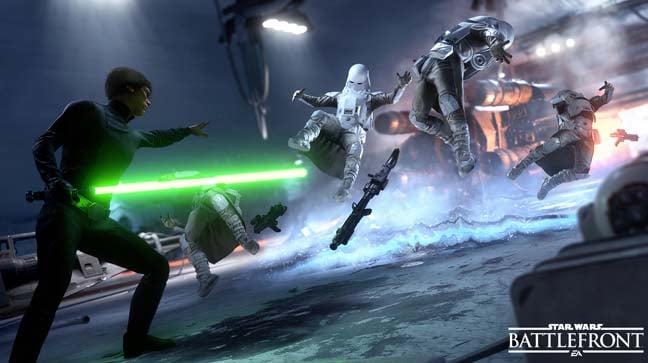 Finally we come to the vehicles and hero characters themselves. The vehicles feel incredibly dumbed down compared the similar jets you might have flown in Battlefield. Like so much of Battlefield, this is almost certainly to give the game universal appeal – this is Star Wars after all – but a little more complexity in flight controls would have gone a long way.

The hero characters have entirely different issues. Yes, it can be fun to leap around as Luke, or throttle someone from afar as Vader. But the way each hero is eventually subdued by blaster fire looks sloppy and at odds with the rest of the game.

Multiplayer modes consist of a mix of the good and bad too. Drop Zone is definitely in the former camp and often leads to incredibly tight, tense games – even if its small maps are generally forgettable. 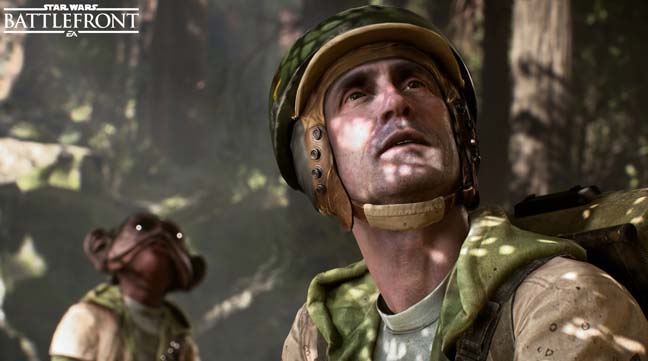 Walker Assault, where Rebels must halt the relentless onslaught of Imperial AT-ATs, is fantastic too. At first it seems completely unbalanced in favour of the Empire, until you realise that a well co-ordinated Rebel team can have the walkers on their knees in no time. 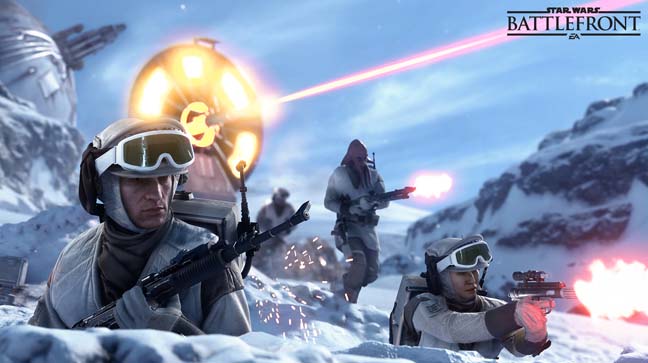 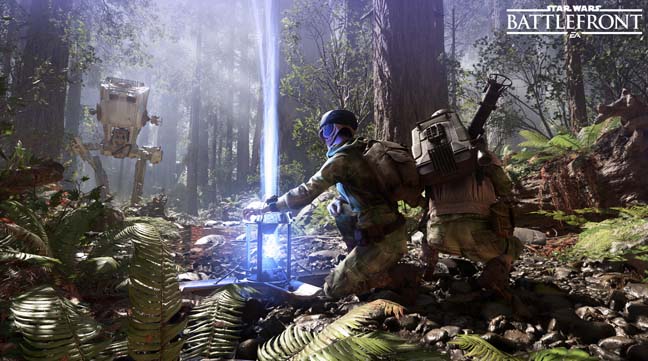 Supremacy: Rebels and Imperials fight for control of five key points... on ground and air

Supremacy completes the trilogy of modes you'll likely opt to play most often. Here two teams of 20 share a common objective to take control of an outpost within each map. Unlike Walker Assault, this mode challenges players to switch from attack to defence constantly, creating a real ebb-and-flow over the course of a match. 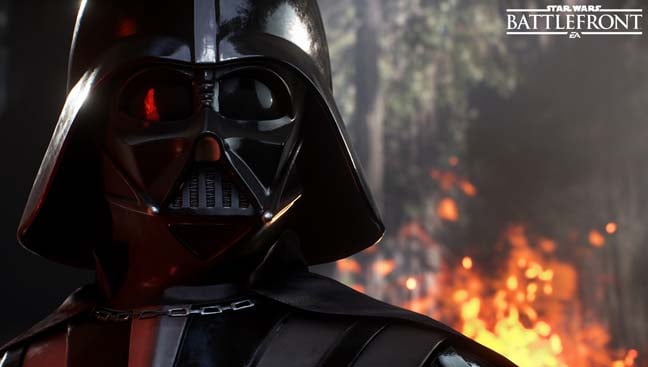 It's redemption time for Darth Vader

Other modes fare less well, and feel more like afterthoughts than Star Wars-inspired scenarios. The much talked-up Fighter Squadron mode, for example, where players take to the air is held back by those limited fighter controls, with only the appearance of Boba Fett's Slave One and the Millennium Falcon giving cause to return. 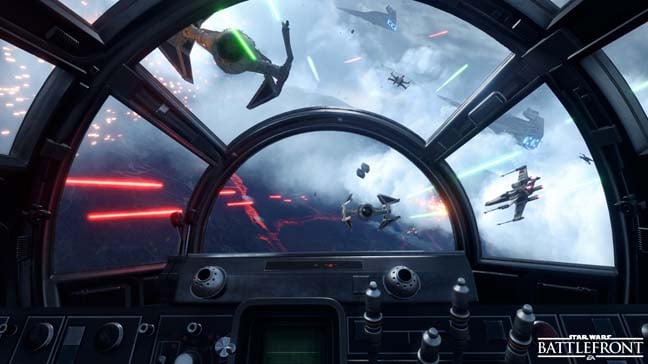 Fighter Squadron mode – a bit of an afterthought 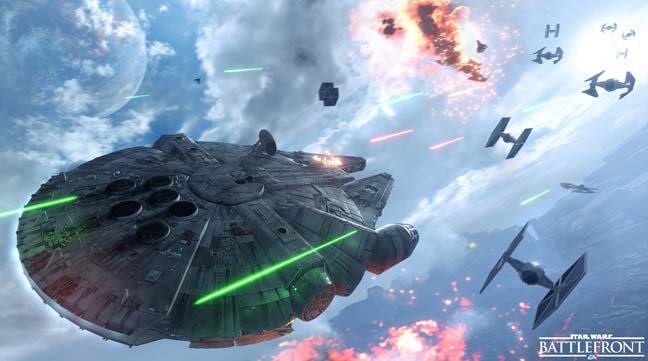 Now these fighter controls on the other hand...

Cargo presents a variation on capture-the-flag that you will have played a hundred times already in other games. Blast offers straightforward team deathmatch that, while fun, I can't see many choosing ahead of Supremacy and Walker Assault, while Droid Run is a type of Domination mode that doesn’t really work. At least servers are consistently solid, no matter what game type you pick. While the use of Star Cards – bonus buffs, weapons and equipment – that you unlock as you play provide variation in you loadout. Though, again, the system is dumbed down in comparison to the levelling-up system you'd find in Battlefield, CoD or Halo 5.

Every way to play touched upon so far involves playing with your fellow man, but there is a way to play Battlefront on your own (or with a friend over local and online co-op). Survival mode provides a shooting gallery of sorts where staying alive amid waves of ever more deadly enemies is key.

Don't kid yourself into thinking there's a proper story-driven campaign to be had here, there's not. But Survival mode is fun to blast your way through once (especially if you take a buddy along) and also gives slight insight into just how incredible any future Star Wars shooter based on DICE's engine could be. 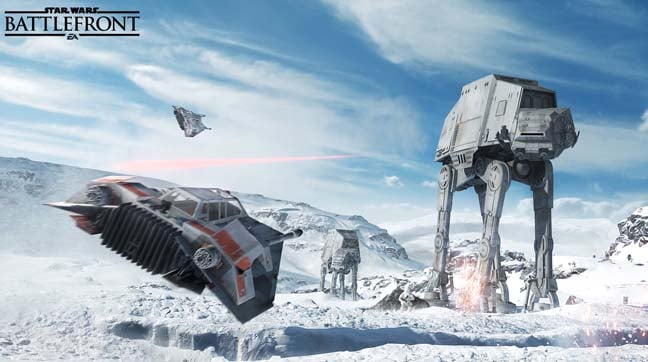 Walker Assault: You'll have to work as a team

Rather like Darth Vader, who is seemingly redeemed for choking to death so many admirals (not to mention killing all those kids) by one act of greatness. So can Battlefront's issues be partially forgiven by its pure, unabashed delivery of the most perfect slice of Star Wars yet.

Occasional balancing issues, a lack of modes of play and the fact that that you'll pay through the nose for more modes via DLC are all problems. But that hasn't stopped me going back for more, even if my Battlefront time is slowly being eroded by the season's other big titles.