Unless you ask Uncle Sam, our new source of data to track desktop OS trends

Windows 10's market share growth slowed in November, according to the two tracking outfits The Register has tracked for the last couple of years. But a new source of desktop OS share data has Redmond's latest doing rather better.

If that data worries Redmond, it can always choose to look at a source of data we're considering for the first time this month, namely analytics.usa.gov/ which helpfully offers the chance to download data on US government websites. We've accessed the 90-day dump of Windows versions hitting US government sites. Yes, that's not an apples-and-apples comparison, because Netmarketshare and StatCounter measure all desktop OSes. We're also a little bemused by the fact Windows Server 2003 makes Uncle Sam's lists, but other versions of Windows Server do not. But as another view of desktop OS prevalence it's worth a gander. Here's the tale of the tape.

That the United States records a higher prevalence for Windows 10 is not a surprise, given that it is a wealthy nation where new PCs are likely to be acquired at a higher rate than elsewhere.

Of further interest is the overall mix of OSes that hit US government websites, outlined below. Again the data is problematic as on some days different operating systems aren't recorded. Symbian and Nokia, for example, sometimes don't make the lists. We've therefore sampled five days on which the peak number of OSes – 13 – all make the data dump. Here's the results. 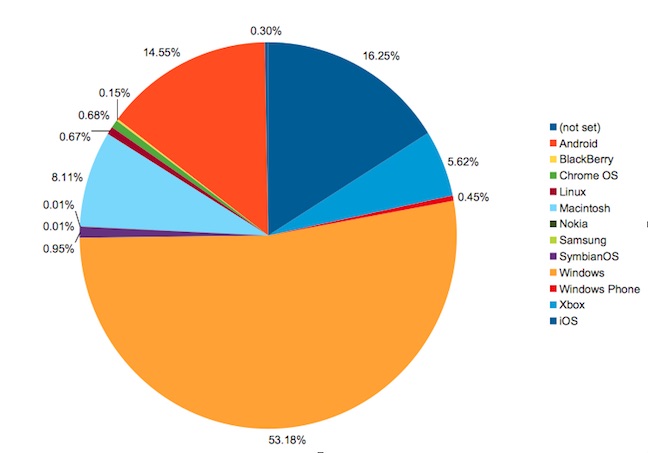 The data behind that chart reports that 32.36 per cent of OSes on US government web sites are from mobile devices. And among those, Symbian's 0.95 per cent spanks Windows Phone's 0.45 per cent.

With Windows 10 soon to land on Windows Phones, that's probably the next needle Microsoft wants to move.

See how we just segued back to Windows? Now that we're there, know that Netmarketshare has Windows 7 down 1.6 per cent to 56.11 per cent since October, while StatCounter records drop from 51.52 per cent to 50.26 per cent. Windows XP still leads Windows 10 according to both outfits, but StatCounter has it ahead by just 0.03 per cent market share. XP's slow demise seems likely to continue, so we can probably start work on the 'After six months, Windows 10 is more popular than XP' headlines for the January edition of this story. ®