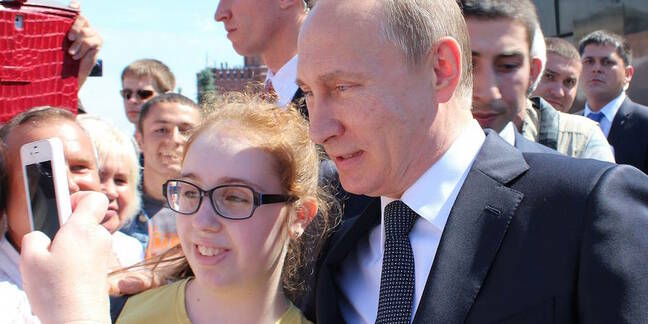 'Nah, you don't need to send me a copy. My lads will get me one'

Russia's mass surveillance of all its citizens' telephone communications has been found to be a violation of the European Convention on Human Rights, which the country ratified in 1998.

The Grand Chamber judgment from the European Court of Human Rights is the product of a complaint made by a Russian national, Roman Zakharov, on the 23 December 2003.

Zakharov, who has been described as "the editor-in-chief of a publishing company" alleged that his privacy was being violated by a Russian law which forced mobile network operators to install equipment which permitted unrestricted interception of all of his telephone communications.

Zakharov's complaint was "in particular that mobile network operators in Russia were required by law to install equipment enabling law-enforcement agencies to carry out operational-search activities and that, without sufficient safeguards under Russian law, this permitted blanket interception of communications".

A press release about the judgment (PDF), which was delivered today, said the court unanimously found there had been "a violation of Article 8 (right to respect for private life and correspondence) of the European Convention on Human Rights".

Zakharov alleged that, "under the Operational-Search Activities Act of 1995 (the OSSA), the Code of Criminal Procedure of 2001 (the CCrP) and, more specifically, Order no. 70 issued by the Ministry of Communications which requires telecommunications networks to install equipment enabling law-enforcement agencies to carry out operational-search activities – the mobile operators had permitted unrestricted interception of all telephone communications by the security services without prior judicial authorisation".

Zakharov "asked the district court in charge to issue an injunction to remove the equipment installed under Order no. 70, and to ensure that access to telecommunications was given to authorised persons only".

Zakharov's challenge was dismissed by domestic courts, as "he had failed to prove that his telephone conversations had been intercepted or that the mobile operators had transmitted protected information to unauthorised persons".

Additionally, those courts claimed that the "installation of the equipment to which he referred did not in itself infringe the privacy of his communications".

Not only was this seemingly in conflict with the nation's own constitution, which guarantees "the right to privacy of correspondence, of telephone conversations, postal, telegraph and other messages" but also with Article 8 of the European Convention on Human Rights (ECHR).

Russia's legal framework around the mass surveillance was found to be unfit because it did not limit the circumstances in which public authorities were allowed to conduct their surveillance activities, nor were there any limits on the duration of those activities.

Grand Chamber judgments are final. It will now be transmitted to the Council of Europe Committee of Ministers who will supervise its execution. ®