The core can ‘compile, execute code without any dependencies’

Microsoft's wheel of change has seen it further abandon closed-source dogma to open its Chakra, thereby improving its karma.

The Chakra in question is the Chakra JavaScript engine it's been working on since 2008 and which the company will now largely open-source.

The release will cover the “self-contained” parts of the code, and will hit the Web as ChakraCore, with support from Intel, AMD and NodeSource.

As a self-contained project, the core will include everything needed to “parse, interpret, compile and execute JavaScript code without any dependencies on Microsoft Edge internals”, Microsoft says.

Redmond's announcement, made by Gaurav Seth and Adalberto Foresti over the weekend, says a GitHub repository will be posted next month.

Seth and Foresti write that the Chakra architecture's “multi-tiered pipeline that supports an interpreter, a multi-tiered background JIT compiler, and a traditional mark and sweep garbage collector that can do concurrent and partial collections” deliver performance and scalability from “cloud services to the Internet of Things”.

The ChakraCore VM can work with NoSQL databases, productivity software and game engines, they write, and supports Node.js to extend its reach.

To prep the open source version, Microsoft got rid of Chakra's private bindings to the browser and to the Universal Windows Platform. It also rewrote the old COM-based diagnostic APIs, providing diagnostics which are “platform agnostic and could be standardised or made interoperable across different implementations”. 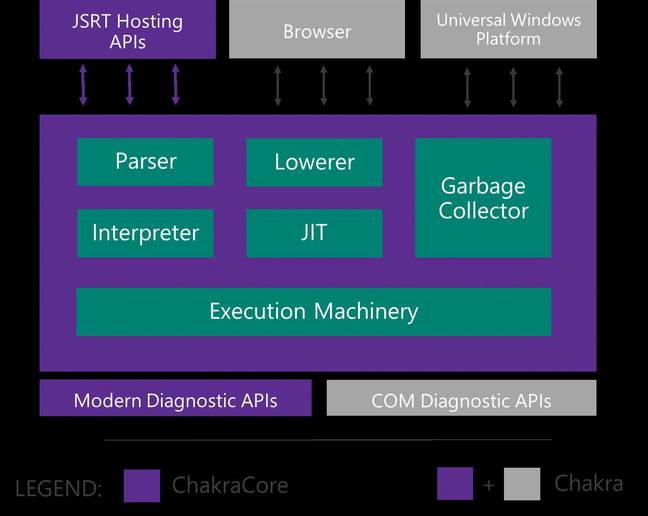 While the initial open source ChakraCore will be a Windows-only beast, Seth and Foresti “invite developers to help us in this pursuit by letting us know which other platforms they’d like to see ChakraCore supported on to help us prioritize future investments, or even by helping port it to the platform of their choice.” ®