The Japan Aerospace Exploration Agency (JAXA) has released the first photographs of Venus taken by its much-delayed Akatsuki planetary probe.

Akatsuki (meaning Dawn) was due to have been in orbit five years ago, but its main engine failed as it was making its final maneuver, off around the Sun. Years of careful rocketry from the probe's auxiliary thrusters have now put it into a stable (if lopsided) orbit around our second planet.

"The orbit period is 13 days and 14 hours. We also found that the orbiter is flying in the same direction as that of Venus's rotation."

Akatsuki carries six instruments – five cameras and a radio probe – that are designed to scan the highly unusual Venusian atmosphere. The wind speeds in the upper atmosphere are up to 60 times faster than the rotation speed of the planet, something that has puzzled scientists for years – on Earth the highest wind speeds are only 20 per cent of our rotational velocity. 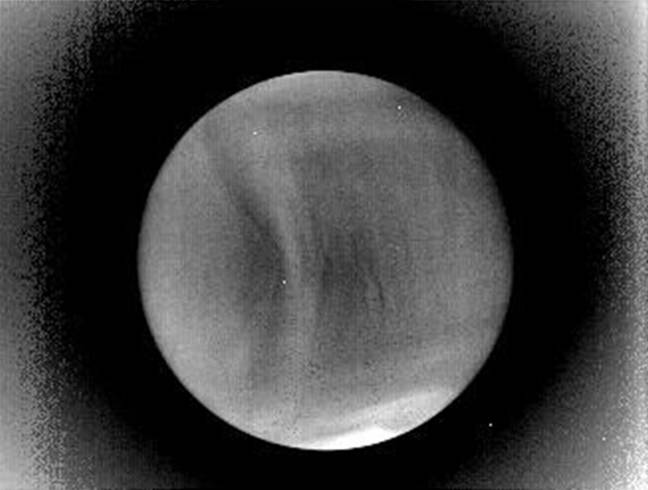 A shot from the Longwave IR camera at an altitude of about 72,000km

There had been concerns that the probe had gotten too close to the Sun on its wanderings and fried its hardware, but JAXA reports three of the five cameras are now working. The team is still working on getting the other instruments out of hibernation mode.

The first images aren't the best we're going to see by far, since the spacecraft is so far away from the target, and it won't be until April that they will be operating at the proper altitude. The probe is still being maneuvered to try and get the best orbital patterns possible.

But it's hoped that the probe can still perform its primary mission of imaging the lightning-filled clouds of Venus and radio scanning down to the planet's surface in an effort to understand its climate. ®