The stealthy Zumwalt looks like a giant iPhone battery case

The US Navy's largest destroyer has finally set sail. And at its helm is Captain James Kirk.

The USS Zumwalt, named after Admiral Elmo Zumwalt, has embarked on its first open ocean trials after eight years of construction.

The $4bn Zumwalt is at the cutting edge of technology and will be the first of three in its class (originally there were going to be 32*). It looks like a cubist painting of a warship, or maybe the iPhone battery case of ships.

The joy of having Captain James A. Kirk (sorry, not a "T.") in charge has not been missed by the USN, with actor William Shatner even sending a signed photo of himself wishing the team god speed. 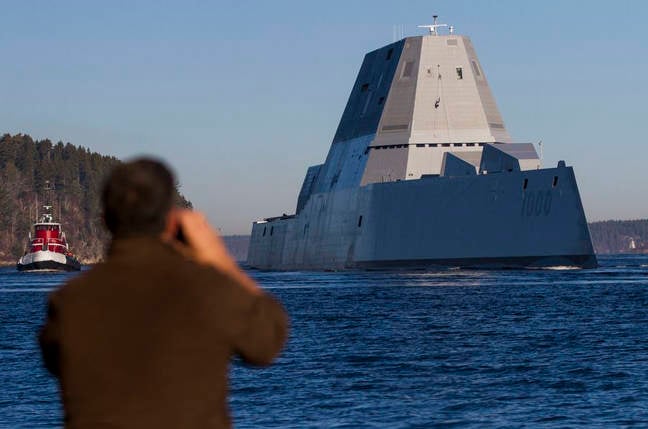 The Zumwalt is expected to cover a wide range of roles, both at sea and near land. It has a comparatively small crew of 158 thanks to its extensive automation (although not as few as the ACTUV drone ship).

The main focus of the Zumwalt's sea trials will be its stability: its gentle sloping sides are good for minimising its radar signature (USN press releases claim the 15,000-ton destroyer shows up on radar as the size of a fishing boat) but not as good for staying upright without computer assistance. ®

* Vulture Central's backroom gremlins note that the Zumwalt class was intended to replace the USN's ageing Cold War-era destroyers. Instead, thanks to the spiralling costs of the Zumwalt procurement program, the USN told Congress in 2008 that they wanted to order more of the proven Arleigh Burke class destroyers (first laid down in 1988) instead of proceeding with the full Zumwalt order.

The USS Zumwalt herself, and her two sister ships, will probably spend brief service lives as experimental testbeds – much as Britain's RV Triton did in the early 2000s before being sold off.