Craig Wright, the model of the Aussie 'entrepreneur'

It's more than a little odd seeing the world hail their libertarian hero, mourn that he was "arrested for inventing Bitcoin”* (as is being claimed on Twitter), and find that he ate government money like a horse.

The Register can't and won't pull out a cheque-book for the inevitable exclusive with Wright.

However, we can look at what evidence exists in public, and at least speculate around two questions:

It's feasible that the appearance of Wired's and Gizmodo's articles naming Wright contributed to the raid, but not because he “invented Bitcoin”.

If the Australian Federal Police raid someone over a tax matter, it's a safe bet that a dispute already existed between that someone and the Australian Tax Office (ATO). The ATO doesn't like litigation: the legal fees are almost always bigger than the tax bill.

If an ATO investigator read a story in The Startup Star Gazette, saw a name that was on their watch-list, and they hit Google, they'd find that Wright's Twitter profile listed his location in Japan. The profile is gone, but Google has a good memory: 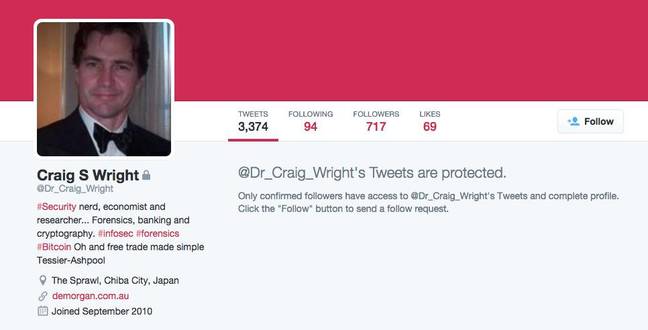 (I suppose only a pedant would expect that a self-proclaimed security expert might be expected to know more about Opsec than listing their location on Twitter and forgetting about Google Cache. Surely?)

Knowledge of Wright's self-published location in Japan could easily trigger an action if, hypothetically, a serious dispute was already in play.

Guardian Australia has since tracked down Wright's landlord, who believed the entrepreneur was preparing to leave Australia.

In that sense, the Wired/Gizmodo articles could be the indirect cause of the raid – but not the reason for the raid.

The ATO has a clear position on Bitcoin – that it's subject to the same taxes as any transaction – not that it's a prima facie reason for arrest. If you deal in BTC, buy and sell legal goods and services with it, or charge a percentage for trading it, you'll pay taxes and they'll ignore you.

Wright as “inventor of Bitcoin” is more difficult. The Register's vote is no, but we're waiting on responses from a lot of people to declare this settled.

He is, however, an odd duck to nominate as your libertarian anti-government icon, because his public history shows he's an expert miner for government money. From his LinkedIn profile:

It's also worth noting that as a lecturer at Charles Sturt University, Wright was on the inside of Australia's government-funded education system.

Is it feasible that Craig Wright contributed to the development of Bitcoin? Anything is, and will be until we know who Satoshi Nakamoto is without any doubt whatever.

But we can say that it's odd to find someone currently touted as some kind of libertarian hero is so fond of government and queued up for it cash on so many occasions. ®

** Wright's home was raided, but he has not been arrested.)

Bootnote: Thank you to the sharp-eyed commenter who reminds us that Wright's supposed location in Japan coincides with a William Gibson novel. Wright is, however, apparently not in Australia at the moment. Perhaps Guardian Oz is right, and he is in England. ®