Microsoft has released Windows Live Writer, a popular blog authoring tool, as an open source project on GitHub, under the MIT licence.

The original Live Writer was developed by a company called Onfolio, founded by JJ Allaire when he left Allaire Corporation, the business he founded with his brother Jeremy to create web development tools including ColdFusion and JRun.

Microsoft acquired Onfolio in 2006. Onfolio had a range of tools for gathering information from the web, and Microsoft wanted to integrate them into the Windows Live Toolbar, so that information "can be easily accessed for use in documents, e-mail messages and blog postings," according to the press release.

At the time, Microsoft was intent on building a community around its Spaces blogging site. Onfolio Writer, as it was then called, was an ideal authoring tool.

Spaces never took off, but Allaire's Live Writer team built a tool which worked well with numerous blogging platforms, including WordPress, Blogger and TypePad. Microsoft added blogging capabilities to Word, but Live Writer worked better, generating cleaner HTML and with handy tools for working with images and videos. It can also be extended with plug-ins.

Microsoft put Live Writer on the back burner years ago, but there was still nothing to beat it for offline blog editing on Windows. 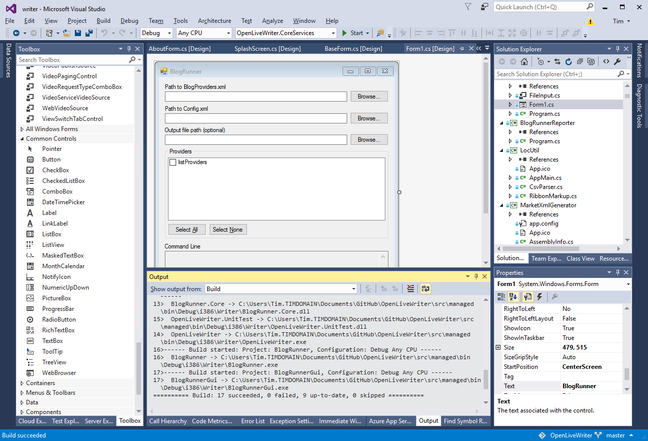 Users petitioned Microsoft to "Save Windows Live Writer", and the new Open Live Writer project is the result. Users on GitHub have been quick to initiate enhancement requests, including publishing content to GitHub itself, and of course cross-platform support for Linux and Mac.

Making Open Live Writer cross-platform will not be trivial, since the tool makes heavy use of embedded Internet Explorer (IE) as its HTML editor. Reviewing the code in Visual Studio shows the extent of the effort to wrap the IE COM components so that they can be used from C#. Migrating from IE will be worth the effort though, not only for cross platform, but also for better support of HTML standards. Microsoft is now focused on its Edge browser rather than IE, so this dependency will constrain the project back on Windows as well as blocking cross-platform support.

A welcome side-effect of the arrival of Open Live Writer is that users can now download the application directly from here, rather than having to install the Windows Live Essentials suite, of which it was the only worthwhile component. ®

Business travel, outside training, and picnic overheads all under watchful gaze of Redmond's accountants
Software10 Aug 2022 | 29