Elvis spotted among miniature masses, our man on the spot reports

PICS We're delighted to report that the first Playmobil expo in the Spanish village of Tivissa turned out to be a bit of a blinder. 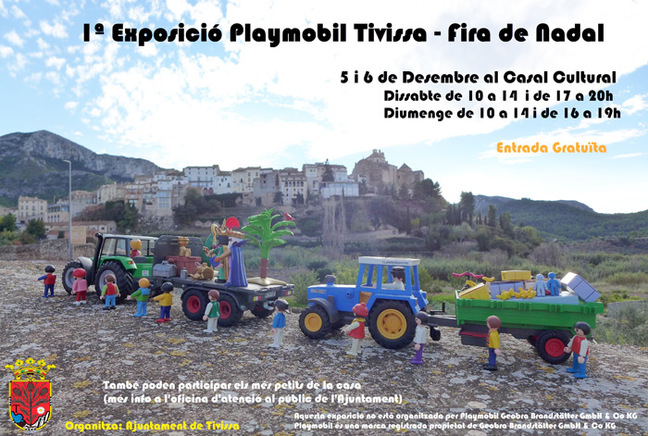 Neil, who "lives in a truck, in a forest, up a mountain near Tivissa with a wild dog he can't get rid of and his Yamaha Grizzly called "Fang", promised to pop down for a shufti and report back.

Neil also told us his spare time is "devoted to developing a bad attitude to strangers whilst looking at gun pr0n", so we're obliged to him for taking time out from these two admirable activities to get photos of what proved to be a mighty Playmobil exposition. Here's his report, and we should note that "click" is the Spanish for "Playmobil figurine". Read on...

One of the big attractions of the IV Fira De Natal, marking the start of the Christmas calendar in the beautiful mountainside village of Tivissa, was the first exposition of Playmobil held in the Casal Cultural, and it proved a great success. The Casal Cultural is a modern building but still retains many vernacular Catalan architectural features such as small windows. This is just a belt and braces approach in case any future Spanish president decides to do a "Franco", and the current incumbent is beginning to look seriously twitchy on that front. 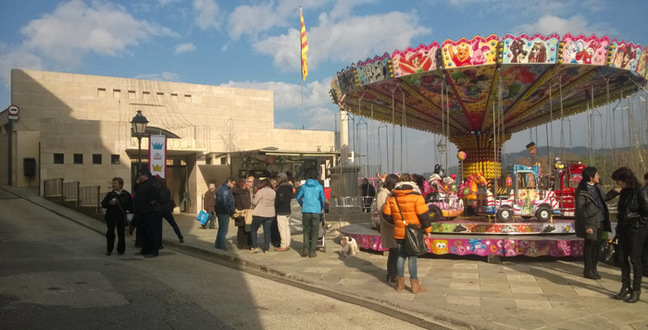 So, I went in, wandered around, photographed, went out and purchased the traditional Catalan Xmas fayre of hotdog, chips and a long round thing filled with custard, sprinkled with sugar and dipped in chocolate. The much publicised Mediterranean diet stops somewhere around the French border so the only way you’ll get a Catalan farmer near fruit is to tell him Marks and Sparks is coming to buy some off him.

Mind you, tell him the discount brigade is about to hove into view and he’ll start throwing the stuff at them (along with the tractor and trailer the fruit is in). After combing olives for 48 cents a kilo, I know how he feels.

The awesome Playmobil farming display should have depicted this aspect of farmer to consumer logistics - or modern slavery as I like to call it - but it didn't, so I can only suggest to certain supermarket chains that they up their prices next year, otherwise who knows what may happen at the 2nd Tivissa Playmobil Exposition. Nuff said. 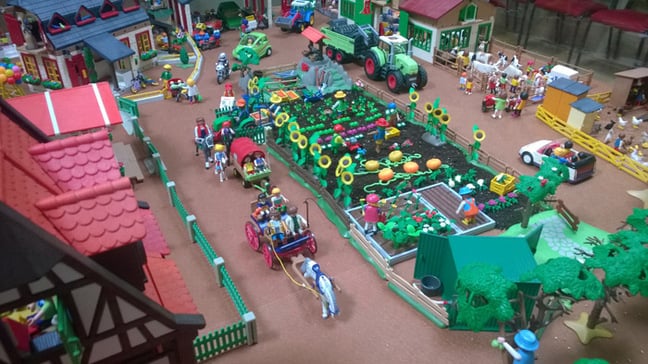 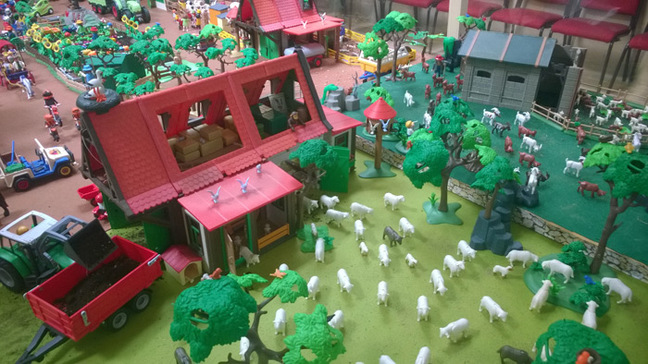 Hold on a minute, is that a monkey in the hayloft?

Anyway, back to the action. There were 12 smaller displays and eight enormous great honkers. From the smaller ones it was evident that dragons are in this year; dragons and cowboys, dragons and medieval knights, dragons and dragons. However, one small display stood out from all the rest and that was one with a unicorn, two pink flamingos and Elvis. What's not to love?

The kid who knocked that one together, (and I'm hoping it was a kid and not some big, hairy, tattooed bloke called Brian) had class and put my ability to be what my mother calls "special" in the shade. It was a beaut. 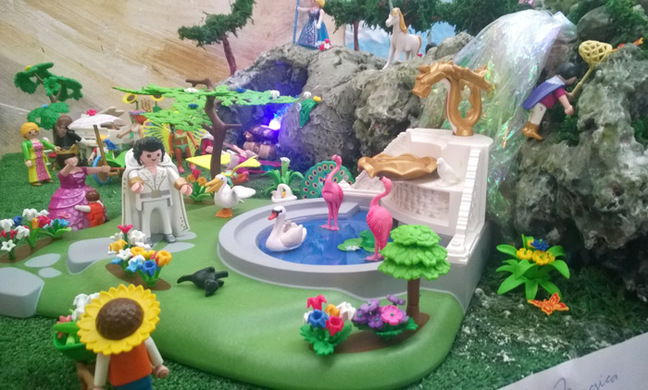 Pure class: Elvis has not left the building

Of the bigger displays, the best was (and I’ve been trying to avoid mentioning this due to certain El Reg readers’ comments regarding a recent French Playmobil heist and my possible role as gangmaster/fence in it) a French town diorama with working train set, buildings and everything. It was huge and well worth the cost of the extra crowbars, pick axe handles and getaway diesel presumably needed to get it to Tivissa.

Funnily enough, there was about a truck’s worth of alleged "off the back of a camion" moody French clicks but I'm sure that’s just coincidence and that display along with all others there, had been well loved and well fingered over the years. A serious amount of cash went into that monster, I'll tell you. 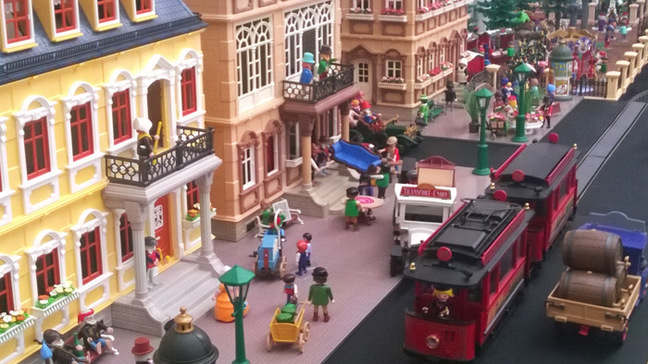 Not off the back of a lorry: The magnifique French town

The knights' castle, Dodge City and construction displays were corkers too. However, the Rallye de Catalunya one lacked a bit of authenticity as it didn't show those attending relieving themselves liberally and from every orifice available, breaking my padlocked gates, lobbing rubbish hither and yonder, or show a rather bad-tempered Scotsman shoving cars that were blocking his access road into ditches. Apart from that, it was pretty realistic. 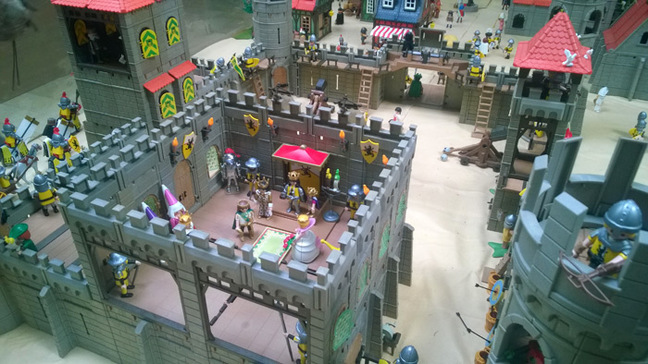 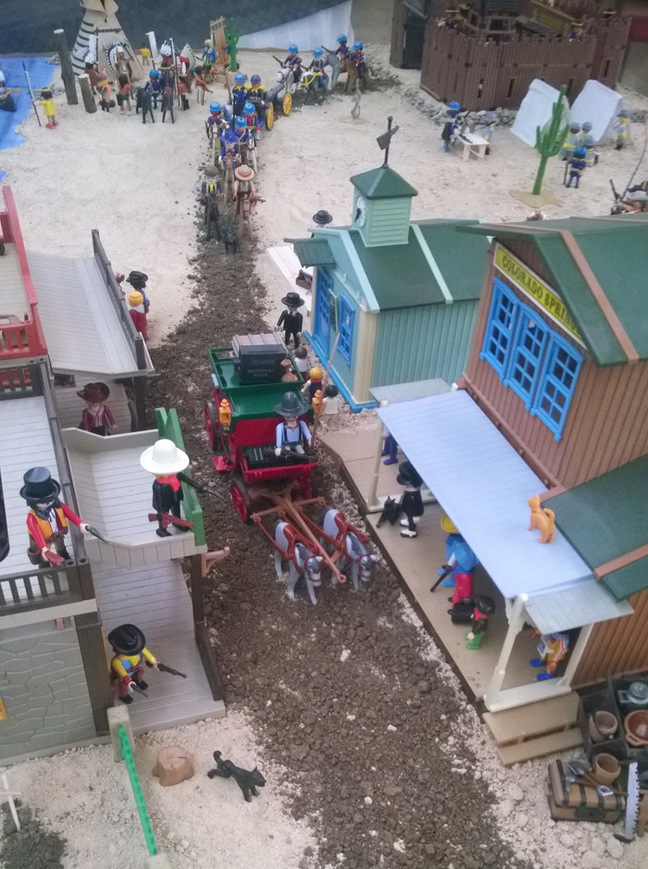 Dodge City - or is that Colorado Springs?* 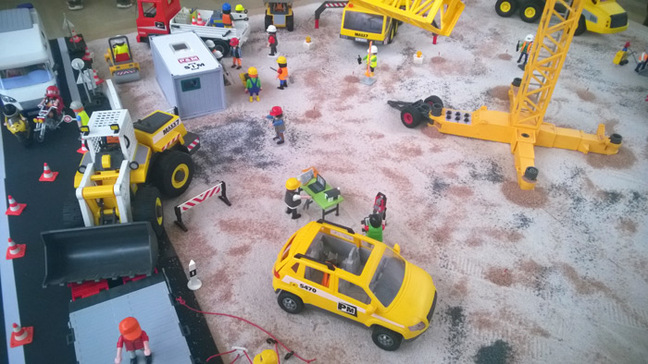 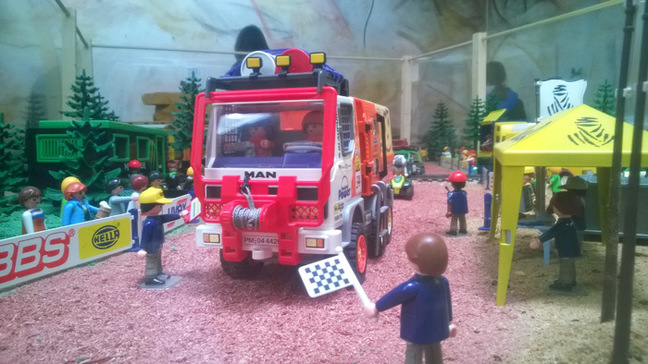 Now, at the risk of causing offence, I must mention the religious diorama about Xmas, which was set apart up on the stage and comprised the usual nativity stuff as well as showing the annual Three Kings and mates team against The Romans in the "Battle of Bejesus" match which was just about to kick off. Ah, that 2000 year old Xmas tradition of beating the whatever out of your neighbour... makes you weep.

It also featured a guy in a spacesuit, so I presume at least one copy of Chariots of the Gods made it to Tivissa at some point, or it could be because he was part of the competition to find four special clicks in all the displays. You choose. 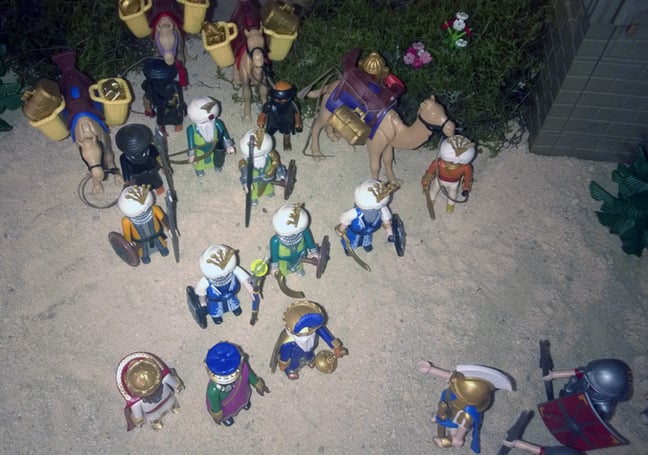 The Three Kings and the Romans get ready to rumble, as seen from an NSA surveillance satellite

So, having previously presumed that an interest in controlling the actions of small figures and making them do your bidding could only lead to a career in HR, I'm a bit of a convert. Masses of effort was put in, the displays had real passion, were really professional and you should come and see it next year.

For info, if you're going to that annual Barcelona "Phone Shop" bladderfest, Tivissa is about a 100km south (or 30km south if you're using a tape measure belonging to that airline who tried to introduce “pay as you pee” toilets (Stansted to Reus)) and is open all year. Tivissa also has a seriously massive and messy Sant Juame party in the middle of the year that lasts a week, but that’s another story. ®