Ancient windowing system can be yours in all its pixellated glory

A Google chap named Christian Stefansen has created an Amiga 500 emulator that runs inside the Alphabet subsidiary's Chrome browser.

“The emulator code is based on the Open Source Universal Amiga Emulator which is about 400k lines of C code,” Stefansen says. He didn't cook up the code out of altruism: Google offers “Native Client”, billed as “a sandbox for running compiled C and C++ code in the browser efficiently and securely.” Porting the Amiga into the Native Client is therefore a good way to show it off to the curious or the nostalgic.

The former will find a pixellated and slow-to-respond windowing system and low-fi graphics (here for readers on mobile devices). The nostalgic may find the emulator a poor reproduction of a platform famed, at the time of its debut, for speed and efficiency.

Anyone will appreciate just how far we've come since the days of the Amiga, thanks to the inclusion of the famous "Juggler" app depicted below.

The app opens with a screen explaining the following feats of computation:

"The images were generated with a standard Amiga with 512K memory. A ray tracing method was used, which simulates rays of light reflecting within a mathematically defined scene. Each image requires the calculation of 64,000 light rays and takes approximately 1 hour to generate. An image is compressed to about 10K bytes for storage. Images are expanded in less than 30 milliseconds. The Amiga hold and modify mode is employed so that up to 4096 colors can be displayed at one time."

The emulator ships with other apps, too. But it also offers the chance to enable floppy disk emulators and load one's own disks. We're sure, however, that some of you remember exactly where they stashed their 3.5in floppies and the Amiga drivers that boosted the disks' capacity beyond the native 880 kilobytes. 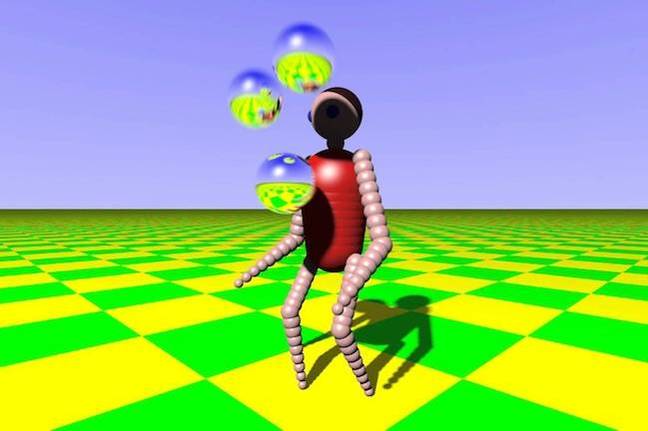 The famous Amiga Juggler app, from a time when developers had many fewer resources to juggle

The emulator can be found here. ®