I have you now! Star Wars stocking fillers from another age

The light and the dark side of the gaming Force explored

The dark video games of the Force

Much as there's a Phantom Menace for every Empire Strikes Back in the roster of Star Wars films, so is there an absolute Sith Lord of a video game for ever Jedi Knight just waiting to ruin your day.

Over the years we've seen a game starring nothing but Gungans – yep, because they proved just so popular on silver screen. Another title that could have finally let us swing a lightsaber (but didn't) and even one that attempted to apply the Mario Kart formula to pod racing (not quite terrible enough to make this list but awful all the same).

Here we detail seven titles that Vader would Force-choke on sight, Jabba would throw to the Rancor pit, that come up short (for a storm trooper), that even a sarlacc wouldn't digest and that would have been best left in a galaxy far, far away (and then some).

If a 'Teras Kasi' sounds like something rather unpleasant you might find floating in a public toilet, it could go some way to explaining why LucasArts thought it could get away with taking the piss by releasing it.

Best described as Tekken meets Star Wars (though that's being especially unkind to the former), Teras Kasi was a 3D beat-em-up designed to rinse what was a particularly popular genre at the time.

Han could fight Vader (and win), Luke could spank Leia to his heart's content (so finally rekindling those repressed feelings of incest) and a bunch of barely recognisable aliens and droids could get their groove on too. A shame then the game was terribly designed, sported some of the worst 3D visuals of the PS One era and was generally unplayable.

They say it's the hope that kills you, don't they? And so it proved with Star Wars Kinect, a game that promised so much only to force choke our dreams to death.

What Microsoft billed as the Kinect's redemption – a Star Wars game that let you swing a lightsaber exactly where you wanted – instead marked the beginning of the end for Microsoft's doomed peripheral. Reducing your participation as a Jedi Knight to jumping on the spot, ducking and wildly flailing your arms about was bad enough. But a 'bonus' mode where Star Wars met Just Dance was the final straw.

The game still stands out in my mind as being such a massive opportunity that was missed. Perhaps now, in this brave new world of Disney-based Star Wars, we might see the announcement of the game that Kinect Star Wars should have been.

After all, imagine the potential profits in a VR Star Wars game with accurate duelling – the possibilities (and lightsaber peripheral sales) are surely endless.

Quite who thought it would be a good idea to take the Gungans – possibly the worst race in Star Wars – and use them as a means to resurrect the already best forgotten SimEarth is beyond us. But that’s exactly what LucasArts set out to do in Gungan Frontier, a game that perfectly matches The Phantom Menace for quality.

Even stranger was the decision to have Boss Nass (that fat Gungan from everyone’s favourite movie) bark constant updates at the player. Everything from ‘the Rancors wiping out a species’, to ‘there’s a shortage of moss’, was reported in one of gaming’s most irritating ‘help’ features ever. As Yoda might say: Shame, feel, you must LucasArts.

Imagine an early top-down Zelda game, with Luke Skywalker cast in the roll of Link ... and you have Yoda Stories. Described like that, the premise actually seems a reasonable one, but sadly being ordered to complete a series of thankless fetch-and-carry quests for Yoda proved about as much fun as it sounds.

Especially given that said quests involved using the same objects over-and-over as Luke looked to warn Rebel bases of impending attack, or sabotage Imperial bases according to Yoda’s randomised whim.

Jarring movement and staccato fighting only added to the game’s issues. Oddly enough though, if Disney was to tighten and repurpose the idea of a Star Wars meets Zelda hybrid for mobile, it would almost certainly make millions.

Rebel Assault may have been released during a similar window to the likes of X-Wing, TIE Fighter and Dark Forces but don’t assume it has anything approaching the same substance of those classics.

Instead Rebel Assault was an early example of an on-rails shooter that epitomised style over substance, with the game’s advanced (for the time) graphics assuming that lifting entire sections from the original trilogy could take priority over anything resembling gameplay.

A wild crosshair didn’t help matters, nor did a lack of mid-mission save points – while the combination of the two proving particularly galling. A later sequel that added equally terrible (and equally on-rails) over the shoulder shooting sections did little to pull the franchise out of the fire. No wonder that LucasArts eventually decided to let it follow Boba Fett into the gaping maw of a sarlacc.

If ever there was a Star Wars character in need of some fleshing out it’s Jango Fett. His back story and the reasons why Palpatine chose him to base his clone army upon are barely touched on in the films and Bounty Hunter was LucasArts’ attempt to right that wrong.

In some ways the studio actually succeeded here too. Bounty Hunter’s plot went some way to showing why Jango might have caught the Emperor’s eye and even served to show how moments in Episodes 2-3 came to be. However, beyond this slight service to new trilogy apologists this third-person shooter was largely a disaster. 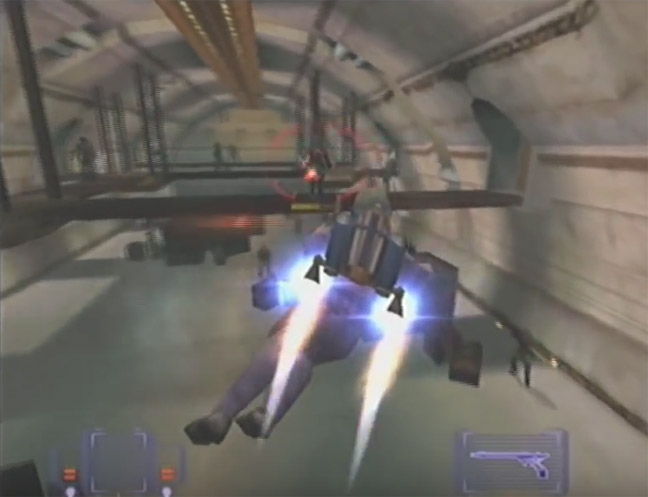 A weak third-person shooter lacking the satisfaction of combat

An absurdly generous auto-targeting system took much of the satisfaction out of combat, mission objectives were so vague as to be non-existent, and Jango was left staring anywhere but where you wanted him to thanks to a terribly implemented camera. Another case of a Star Wars nearly, but not quite.

Command & Conquer collided with Star Wars for the first of many times in Force Commander – it’s just a pity that this first marriage wasn't a happy one.

All the right ingredients were there, with AT-ATs, AT-STs and land speeders all being faithfully recreated. But the game was badly hampered by AI that seemed hell-bent on going the long way around wherever possible, or else forgetting to return fire at nearby enemy units.

The final straw was a later Imperial mission on Endor where hidden Ewoks would tear your forces apart with traps made of rocks and felled trees. Cute in Return of the Jedi, perhaps, but excruciatingly frustrating here. ®