When it comes to video editing, Windows and Mac rule the screen. Professional apps by the likes of Adobe, Avid and Apple only run in the Win/Mac world and Apple even throws in a pretty sophisticated video editor (iMovie) for free.

No matter how much you love Linux and open source software, you're never going to get Adobe Premiere or Avid running on a Linux box. If it makes you feel better, most of the massive render farms at studios like Pixar run exclusively on Linux. No? Me either.

The good news is that IT IS possible to edit and produce professional quality video on Linux.

Figuring out where and how to start can be overwhelming though. Video editing software offers a huge variety of options, ranging from the very basic editors that come pre-installed in many distros to the heavyweight options like Cinelerra.

Fortunately, most of us do not need the massively complex full-featured editors used to produce feature length films. And I strongly suggest beginners don't start with the feature-complete, everything-and-the-kitchen-sink variety of editor because it will quickly become overwhelming.

Start with something basic and when you find something you want to do that your current editor can't do, then start looking for something more complicated.

What should you look for in a video editor? First and foremost make sure that the editor can import whatever format of movie clips your camera produces – particularly if you've got a 4K-capable camera, as not every program supports 4K video yet.

Also bear in mind that adding effects and filters to 4K video can quickly bring even top-of-the-line consumer PCs to their knees. All testing was done on a MacBook Pro with a 2.7GHz Core i7 chip and 16GB of RAM (running Linux Mint 17.2) which is about the bare minimum hardware you'd want to try editing 4K video on.

With more and more phones shooting 4K video, it increasingly feels like anything that can't handle 4K shouldn't be considered a serious piece of software, so all testing was done with 4K MOV files shot with a DJI Phantom 3 drone.

Regardless of what camera you use, be sure to visit each of the project pages for the software below and double check to make sure your camera is supported. The same goes for output format, if you need to export/render to a specific codec your search may need to be a little more limited.

For example, while Lightworks is a capable editor the export options in the free version are extremely limited, which is why it won't be covered below. At the other end of the equation is an app such as Avidemux, which is fine for quick edits to single clips – trimming commercials out of something you recorded for instance – but lacks tools, such as a timeline editor.

Instead we'll start with an editor that is probably familiar to most Ubuntu and GNOME desktop users, since it has long shipped as part of the default application stack – OpenShot.

OpenShot was once the go-to standard for video editing on GNOME-based distros. Unfortunately, OpenShot 1.x is looking largely like abandonware at this point. In fact, it's supposed to. The primary developer has been hard at work on OpenShot 2.0 for, well, quite a while now. There's a good reason for the delay, OpenShot 2.0 will be a total re-write and even abandons the underlying Media Lovin' Toolkit (MLT) backend in favor of a custom backend. It's no small undertaking in other words.

It's also not here yet. For now you'll be using 1.4.3, which is a capable, if somewhat basic video editor. Thanks to FFmpeg under the hood, it has good codec support and will work with just about any video, audio, and image formats.

The basic tools of a good video editor, including clip libraries, timelines and drag-and-drop editing are all there. In fact, if you're coming from iMovie or Windows Movie Maker you'll feel right at home with OpenShot. 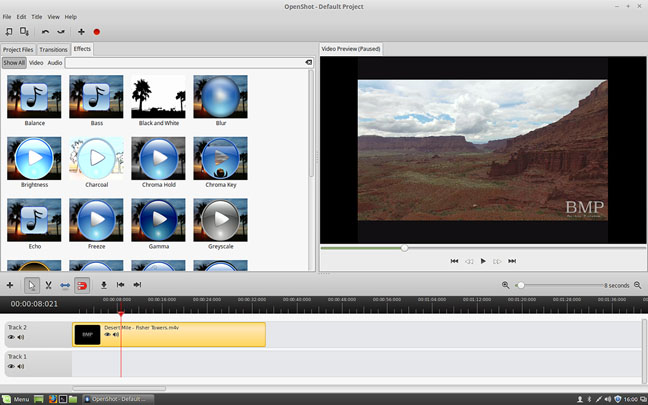 Unfortunately, working with 4K video clips proved painfully slow even with an SSD and 16GB of RAM. And by painfully slow I mean it wouldn't really even play, repeatedly crashed the app, and made it otherwise unusable.

Still, if you're looking for something easy to use, don't mind the lack of updates, and don't have any 4K footage then OpenShot still makes a decent editor.