Like all odd-numbered GIMP releases, 2.9.2 is considered a technical preview, but the features here will form the base of the stable release GIMP 2.10.

In the mean time, I've found 2.9.2 to be very stable, though you will need to compile it yourself in most cases.

Why bother compiling? This release has a lot of under-the-hood changes – in particular this largely completes the move to the Generic Graphics Library, better know as GEGL. GEGL is GIMP's "new" image processing engine and the project has been slowly incorporating GEGL code for quite a few releases. In fact, while the GEGL in GIMP still gets referred to as "new," the project itself began life in 2000 and GIMP has been slowly porting over to GEGL since 2007.

GIMP 2.6 (which came way back in 2008) featured a few GEGL-based color grading tools and an option to use GEGL "filters," which were label as "experimental." With 2012's GIMP 2.8 GEGL made its way into "projection - flattened representation of stacked layers".

Now the upcoming GIMP 2.10 will use GEGL for pretty much everything.

That means GIMP 2.9.2 has support for high bit depth image (16/32bit per colour channel processing). There's even an option for 64bit-per-channel images, though that appears to be a feature planned for the future. The GEGL support also means GIMP now has basic support for the OpenEXR high dynamic range imaging image file format. In addition to OpenEXR, GIMP 2.10 has been upgraded to read and write 16/32bit per colour channel data from PNG, TIFF, PSD, and FITS files.

The other big news is the new on-canvas preview for image filters. In past versions of GIMP most filters only offered a very small preview window within the filter dialog box. It works, but it often means you have to stop interacting with the filter to zoom and pan around your image to see what the effect is doing. With 2.10, many filters will be able to apply their effect to your image in the background in real time. 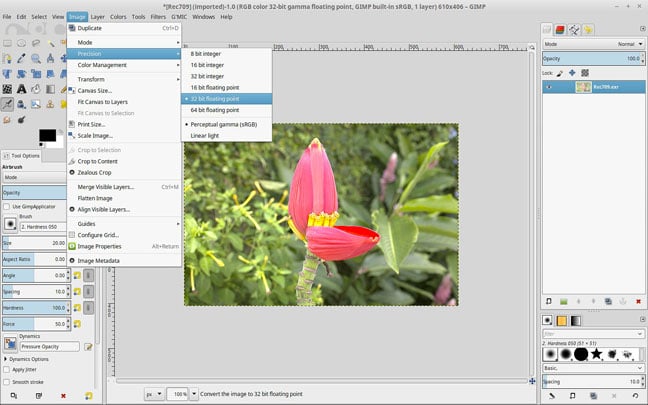 According to the GIMP wiki, 57 plugins have been ported to become GEGL operations, with another 27 in progress. Another 37 plugins still need to be ported. Unfortunately some photographer favourites like Unsharp Mask, Gaussian blur and Red Eye Removal - all of which become much more usable with real-time previews – are still works in progress (if you use the bleeding edge PPA for Ubuntu you'll find that Gaussian and Unsharp Mask have been updated to GEGL). Still, strictly by the numbers, the majority of GIMP's filters now offer live previews.

Third-party filters are a different story. Most have not yet been ported to GEGL. For example the incredibly powerful (and very popular) G'MIC plugin has not been ported to GEGL (and probably won't be any time soon given the fact that G'MIC is a stand-alone framework used in quite a few applications). G'MIC does, however, work just fine in GIMP 2.9.2.

The work on the GEGL port also has another great fringe benefit in that downsizing operations - that is, for example, downscaling an image for the web, now produces higher quality results. There's another new feature handy for images bound for the web: basic support for reading and exporting WebP images.

WebP is Google's proposed image format which it claims will produce smaller files at similar resolution to JPEGs. So far it is only supported in the Chrome and Opera web browsers. GIMP's WebP support is missing a few features, like the ability to embed ICC profiles or metadata and support for WebP's animation feature, but given that the primary reason to use WebP is to reduce file size, stripping metadata is arguably a feature, not a bug.

Completing the move to GEGL also puts some exciting new features on the GIMP roadmap, including the holy grail of image editing - non-destructive editing. You'll have to wait for GIMP 3.2 before non-destructive editing lands, but in the mean time the high bit depth support and filter previews feature already make all the work (and users waiting) for GEGL feel well worth it. 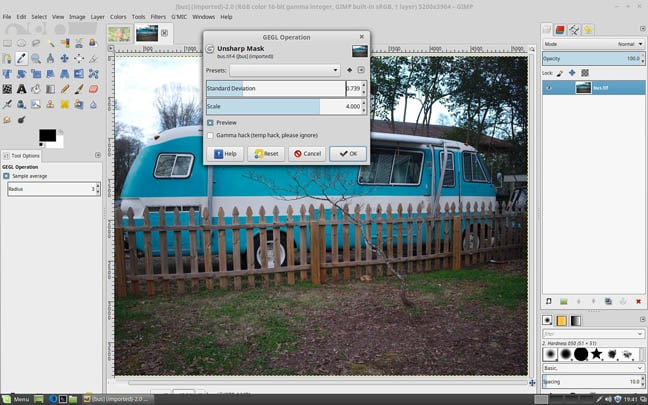 GIMP 2.9.2 also features a completely re-written colour management plugin. It offers quite a few new features and much better colour management support. It means that GIMP no longer completely fails with combining images with different colour spaces. To go along with the high bit depth support GIMP now uses LittleCMS v2, which minimises colour fidelity loss when you convert images between the high and low bit depths.

As I said earlier, GIMP 2.9.2 is considered a technical preview. Unlike some past previews, though, I've found this one to be rock solid in my testing. That said, don't try to do production work in this release. GIMP has a "when it's ready" release policy, but much of what's due in 2.10 is already in 2.9.2, so hopefully an official release of 2.10 won't be too far in the future. ®