+Comment DataCore's SANsymphony-V software with a parallel IO feature has produced a radical advance in price/performance on the SPC-1 benchmark.

SPC-1 is an objective test and measures the data access performance of a storage subsystem. It enables meaningful performance comparisons to be made between different vendors' systems.

Think on that for a moment. 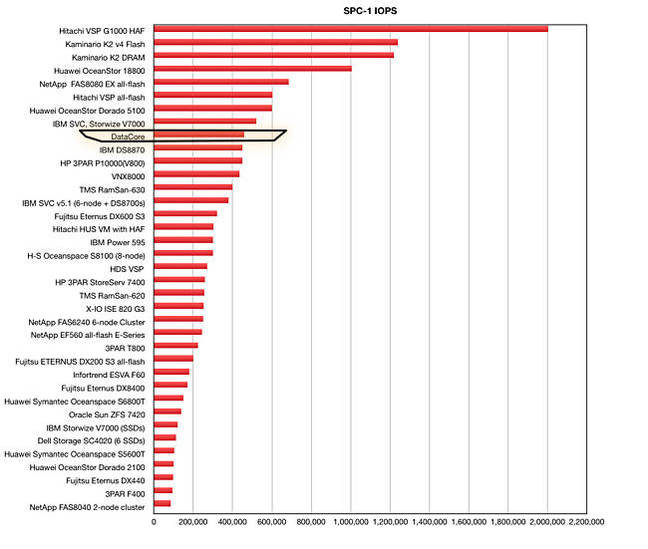 Some more good news. The DataCore/Lenovo system had an average response of 0.32 milliseconds at 100 per cent load. We think this is an SPC-1 record as well.

The SPC-1 IOPS chart-topping Hitachi VSP G1000 had a 1.15 millisecond average response at 100 per cent load, 72 per cent slower and costing 98 per cent more.

This is just unreal. 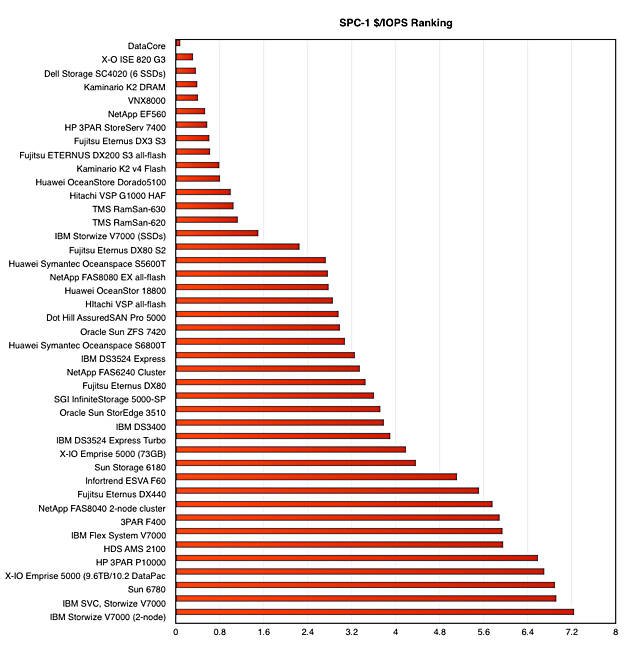 What we can certainly say is that DataCore's software uses cheap commodity server and SSD hardware to blindingly good effect.

The configured storage capacity was 10.1TB and it was operated in a RAID 1 mirrored fashion. It was composed from 16 x 480GB Samsung SM863 SSDS hooked up via a 6Gbit/s SATA interface. There was a single 500GB Samsung 850 EVO SSD linked to an internal controller for page swapping.

Why did the DataCore system perform so well? It has an Adaptive Parallel IO feature in SANsymphony-V v10.00, which has the server processor's cores running IO in parallel instead of queuing them up through a single core.

It appears that DataCore's parallel IO virtual SAN running a server with SAS-connected flash storage is the 9th fastest SAN in history in SPC-1 terms, the runaway price-performance leader and the one with the lowest latency at 100 per cent load. We cannot see any way in which an externally-connected SAN, using Fibre Channel or Ethernet, could be faster, because parallel host server IO is so fast.

We would love to know how the DataCore software performs in a server using PCIe-connected flash, as this would cut out the SAS protocol stack and should produce an even higher SPC-1 IOPS number.