British bureaucrats are world's most social-media-tastic

But wait a minute, Sir Jezza. How did you work that out?

Cheer up, Britain. Your government may not be able to control either its borders or its rivers, and it may have sent its farmers back to using pen and paper and telephone hotlines. But there's one way it still leads the world, according to the Head of the British Civil Service.

The Whitehall supremo says the UK is the best in the world when it comes to our civil servants using Twitter and Facebook – and he lists it as a reason to be cheerful in 2016.

Cabinet Secretary Sir Jeremy Heywood KCB CVO (for it is he) used his government Twitter account over Christmas account (@HeadUKCivServ, in case you forget who he is) to enumerate twelve reasons to celebrate the UK's Civil Service.

Amongst several trumpeting diversity, one of the dozen excruciating Tweets, under the hashtag #12DaysofCSMas, listed leadership in social media.

Heywood's citation is where it gets interesting.

The Whitehall supremo cites as evidence an OECD publication from last summer called Government at a Glance. You can find it here. This boasts of new chapters, one of which describes "digital government" (sic). One of the criteria the OECD uses for excelling at digital government is (with grim predictability) "social media use by government". Dig a little further, however, and we discover that the UK leads the world in social media use by government using only one data point.

"The top executive offices in the United Kingdom (@Number10gov) and Chile (@GobiernodeChile) have managed to build a community of Twitter followers that equates to roughly 4% of the domestic population. Data on re-tweets, replies, favourites, etc. further illustrate that there is overall interest in at least some of governments’ social media activities"

It beats the Twitter account of the prime minister of Turkey into third place. Take that, Turks! 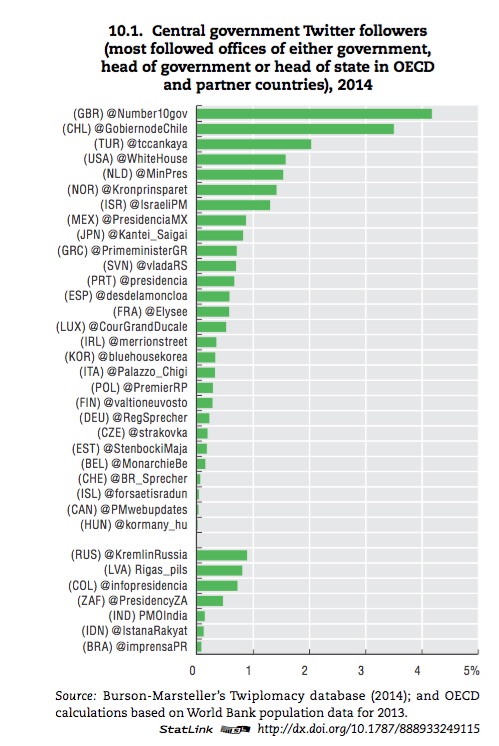 This amazing metric is gleaned from material cobbled together by lobbying company Burston-Marsteller, in its “Twiplomacy database” – and it's data that is already very old. The BM report used by the OECD came out in 2014. There's already been another study, with the follow-up collecting even more frivolous metrics on the "conversationality" (aka chattiness) of world leaders' Twitter accounts. Or more accurately, the chattiness of the world leaders' respective PR teams.

When it comes to all other KPIs cited by the OECD, the UK is middling. Unremarkable. Doing what everyone else is doing. So would it be rude to mention the farmers?

When it comes to walking the digital walk, using proven evidence of the great digital "transformation" experiment, Heywood's own Cabinet Office can be forgiven for trying to divert our attention. The government has deprecated its ageing, but fully functional, digital gateway for an imaginary one that it has yet to build. And its interference in one departmental project, which had to be abandoned, saw it slammed as "childish", lacking vital skills, and with all the power but none of the responsibility.

It's just as well for Heywood that nobody noticed his Tweets.

Described as a "lean-livered, bloodless Brahmin" who "really runs the country" (by Quentin Letts) and "a perfect manifestation of everything that has gone so very wrong with the British civil service over the past 15 years" (by Peter Oborne), Heywood's mastery of buzzwords ("stovepipe organisations" ... "horizon-scanning") allowed him to survive a change of government. He was once Tony Blair's PPS and Gordon Brown's head of policy.

But you knew that already. ®

Elon Musk starts poll with one question: Should I step down as head of Twitter?

TikTok could be banned from America, thanks to proposed bipartisan bill

If you listen really closely, you can hear Mark Zuckerberg's excitement
Security14 Dec 2022 | 27