No, I'm quite happy with my own gear, says punter 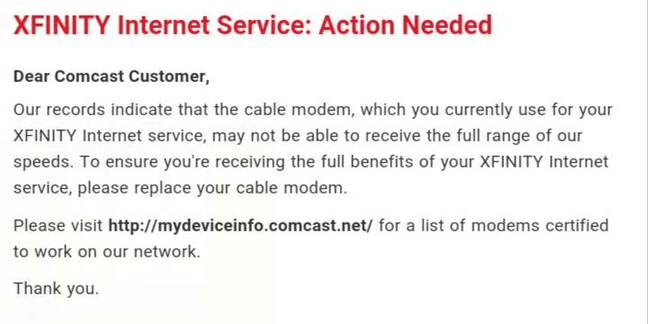 Comcast subscribers are complaining that the broadband biz has been bombarding them with requests in their web browsers to get new cable modems.

According to Chris Morran at the Consumerist, the ISP has been injecting popups into webpages fetched from the internet – specifically, messages that urge people to get new modems to take advantage of faster cable connectivity.

It appears Comcast has been injecting the alerts much like it injects warnings of detected online piracy, which pop up if the ISP thinks you've been downloading copyrighted stuff without paying for it. The HTML and JavaScript is hot-wired into the webpages while in transit; encrypted websites should be safe from Comcast's tampering.

The missives, which cannot be completely disabled and only temporarily dismissed, claim that the new modem is needed to "take advantage of the full range of available speeds in the area." Presumably, if one upgrades, the messages go away.

In addition to the constant notices, the customer says he has received multiple letters from the company via snail mail. The customer, who goes by the name "BB," says he is fine with his current network speeds and only wants the upgrade notices from Comcast to go away.

Comcast allows users to either use their own cable modems or to rent a modem as part of the monthly service package. When the carrier updates its network, users will occasionally be required to obtain new modems in order to get the improved network speeds.

The Register has contacted Comcast for its side of the story, but has yet to hear back from the cable giant.

Customer service has long been a source of complaints for Comcast. The cable giant has been accused of mistreating some of its customers and has been ranked alongside other cable providers near the bottom of customer satisfaction ratings. ®

Updated It's got a name and logo so it's serious, you guys