Humanity versus GWX: Are we ready for the battle? 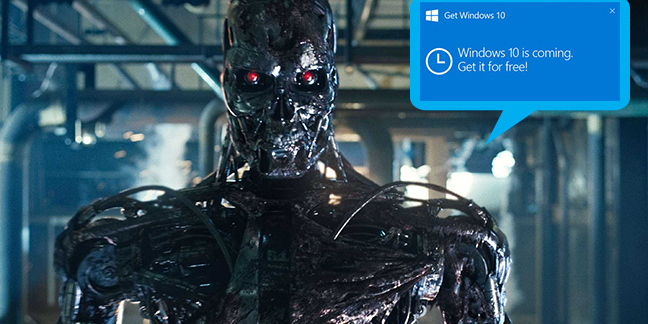 RoTM Windows 7 and 8 installations are finding new ways to re-enable Microsoft’s intrusive “Get Windows 10” nagware, even when users disable it.

An additional background process has been detected that resets the Registry’s AllowOSUpgrade flag twice a day. Prophylactic measures taken by users to disable the nagware – such as these – therefore have limited use. The additional process has only been found by some users, and appears to arrive in a modified version of the KB patch which unleashes GWX.

This can either mean one of two things, neither of which is good.

One is that Microsoft is changing the payload of the GWX nagware patch without documenting the changes. If the contents of a KB patch changes, then a new patch should be issued, and the older one retired, particularly if the newer version of the patch spawns new processes.

Similarities include: GWX won’t take "No" for an answer, and is difficult to disable. It targets old and neglected computer installations (e.g. Windows 7), and the technically naive (home Windows users). More worryingly, GWX now appears to be mutating, changing its techniques in response to preventive measures. It’s cat and mouse out there, and GWX appears to be winning.

The next stage of mutation would be for GWX to make the leap across species. The first signs of this would be cash machines reminding you to “Get Windows 10”.

Pretty soon almost anything with a CPU and display will be reminding you that you’re eligible for a Windows 10 upgrade. And that could only be the start. What if now-sentient, species-hopping Get Windows 10 pop-up mates with the MacKeeper popup? Or The Economist?

Surely the era of self-replicating grey goo feared by computer pioneers including Bill Joy, and HRH The Prince of Wales, is almost upon us? All of this is possible, if you only think hard enough. ®

That discussion you were dreading has to happen sometime