Er, what sort of Docker experience were you expecting?

Docker has cited an explosion in job postings looking for Docker experience as a reason for techies to get hands-on with its containerization platform.

In a blog post, the containerization vendor’s Mano Marks cited a chart from job-listings site Indeed that shows a sharp increase in Docker-focused job postings worldwide. 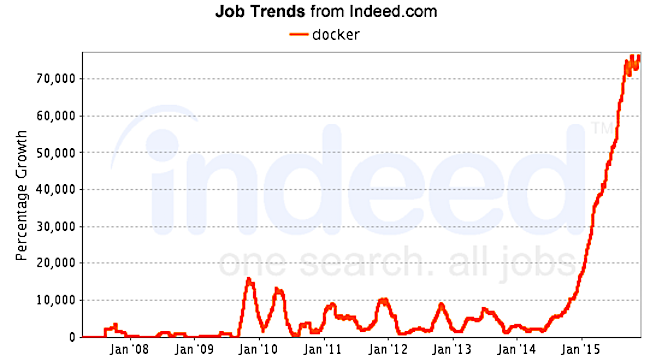 “It’s safe to say that companies all over are investing heavily in Docker to transform their application life cycles,” wrote Mano.

"[Docker] will be an incredible asset as you look for jobs in the fast moving DevOps job market as well. Docker use is growing fast. The more you know Docker, the more you are going to be in demand."

If those numbers seem ridiculous, don't forget it's just math: just over 0.06 per cent of Indeed's job postings mentioned Docker by the end of 2015.

But what's more curious is that Docker was only launched on the world in 2013. Were some super prescient companies recruiting people with Docker skills five years before the platform hit the market?

Or do Indeed's figures not quite distinguish between plaid shirt wearing, facial hair sprouting types used to grappling with shipping containers ... and people who ply their trade on the waterfront?

There's no doubt containerization is a hot skill right now. But if your next job results in some grumpy bloke from Tilbury demanding a job on your development team while waving a longshoreman's hook, you'll know why. ®

Dockershim deprecated with release of Kubernetes 1.24

Search for sustainable business model continues, but most usage will still be free
Devops31 Aug 2021 | 34

Docker support deprecated in Kubernetes will break your clusters, says CNCF ambassador. It's only the runtime, says Docker

Admins have until late 2021 to move away, but Windows containers need caution
Devops3 Dec 2020 | 9

DockerCon But you can pull down your dev environment from Docker. Is it solving a problem that doesn't exist, though?
Software27 May 2021 | 9

Docker Desktop for Apple Silicon is here, but probe a little deeper and you'll find Rosetta 2 staring back