One of the great things about deploying Docker is that it can take mere seconds to spin up a new instance.

Photon can be thought of as a competitor to CoreOS and similar offerings. What is different about Photon is that it exposes VMware’s APIs so developers can leverage some of the features coming with the Photon Controller platform - which is due out shortly. Photon is also free to use and even fork should you wish to do so.

Classic VMware features such as VMware HA and FT are on notice in a Photon-centric world. When developers build new web-scale applications, the high availability functionality should be managed using one of the many frameworks to manage availability and developers working to ensure correct functioning in the event of a failure. Things, they are changing!

I took a crack at building a Docker application on Photon using VMware Fusion on Mac - but you can use other desktop virtualization systems such as VirtualBox. The new, Dockerised hosts to support this design are still in private beta at present.

To get the basic Docker on Photon setup installed, follow these instructions:

The Photon installer asks very few questions and installs very quickly. It will ask the install type, to set host name and root password and that’s it. It obtains a DHCP address by default. We are talking web scale here, not individual hosts. Speed and automation are everything.

From inside the Photon Docker installation there is a NAT service that can be configured for the Docker images to work. At deployment time, an admin can specify the ports to use and Docker will create the required network mappings.

At this point it is probably prudent to address how Docker images work. Docker images are designed to be stateless servers that are essentially just the application, no full fat VMs here. Docker containers can (should) be created and destroyed at will without data loss. If one gets damaged or broken, it can just be destroyed and another one deployed in its place.

All Docker images are built much like a sandwich with several different layers of separate file systems glued together. The reason for this is to make images easier to maintain so that when an image is rebuilt or changed, a minimal amount of work is required.

Log in to the docker host and update it with the latest patches, then issue the command:

Reboot the server by typing reboot and press enter.

Once it has restarted, we need to turn on the Docker daemon and set it to automatically start on bootup. Use the command:

Follow this with a restart. At this point you can verify Docker is installed and working by using the command:

This will provide proof that Docker is working as well as some information that appeals to the geekier amongst us. Now that this is done it is time to build the Minecraft image that we can deploy at will.

The build information is held in a special file called a Docker file. In here we specify what is included, commands to run and any files we need to include.

Start building the file by creating a folder called mineserver and move into it:

At this point we can create and modify the dockerfile by using the command:

Comments can be added by prefixing the comments with a hash. For example

Building the setup is done by including commands in the dockerfile.

There are several commands that can be used to build up the Docker file. All Docker images need a base OS from which to build the application platform. Ubuntu is a very popular base OS.

Build the Dockerfile by editing it as follows, using nano or vi (whichever editor you are happy with) and copy the following into the file:

It should be noted that there are several items in this example that are not designed for production utilisation, such as grabbing Ubuntu latest and the Minecraft server files from the web. In a real Dockerised world you should have files stored within your network and use version control within the infrastructure.

To build the Docker file, use the command:

If the output shows any errors, check the dockerfile for errors and the error on the console. Assuming the image is built you can run the docker instance by running the command below: 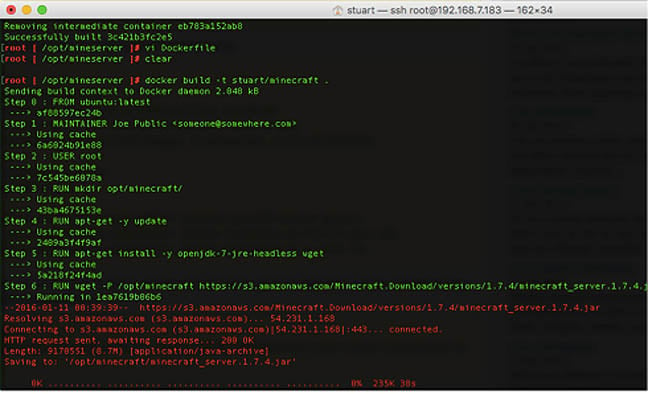 The above command will always ensure that when the docker run commences it will always use the latest version of the dockerfile in question. Obviously each instance of Minecraft will need its own network port. Do the port configuration by changing the port number (25553).

Some other commands that may be useful include:

The screen grab above shows all the images that are built and available locally. Once built as above, it becomes a very simple process to create as many instances as you desire by repeating the command. Each container will be given a unique ID at runtime for the duration of its life.

To see which containers are running issue the command:

To kill off an instance use the command:

This is only a very basic overview of what can be done but it touches on the core items of creating and using Docker in a Photon environment. What makes Docker so easy is the fact that it is very easy to get accustomed to with only a moderate amount of Linux experience and after a very short time it will be second nature.

As for what the new Photon Controller will bring, that will be an interesting question. ®