Employers want to track your junk

Something for the Weekend, Sir? My prospective client is staring at my nuts. The quality of my work is apparently not too important. What really matters are the warm bits that dangle between my legs.

Indeed, the human resources rep is insisting that I be prepared to present my lobster and urchins on demand, as regularly as possible. You’d think I would be flattered at such interest in my hoe handle and rockery but frankly it is embarrassing.

Don’t get the wrong idea: I have not been auditioning for a raunchy IT-themed gonzo sex vid. Mind you, such a concept is curiously intriguing… in the same ghastly kind of way that you might find yourself transfixed by the uncommon sight of someone puking through their nose.

Just imagine the scene. A vaguely dubbed but rigorously moustachioed man phones up a slightly glossy faced blonde on the helpdesk to report that his (Thinkpad) joystick is getting stiff again. Typing in his name, she stares adoringly at his log for a while and then promises him she will be coming soon (it’s only two floors away in the lift) to take his particulars in hand. A few minutes later, they are testing the compatibility of their interfaces and giving their enhanced workflow plenty of opportunity to bed down.

Afterwards, we see her clearing his issue while he emails back a feedback form.

No, nothing like this has been happening to me. HLW has not signed me up to Readers’ Husbands. I will not be changing my name to Dirk Dabbler.

Instead, my client has been persuaded by human resources to convert his nice quiet office into a raucous hotdesking bedlam and will be monitoring my presence by means of a gadget under each desk that will gaze at my crotch all day.

A similar setup was recently social-media shamed and subsequently removed from the offices of UK daily newspaper The Telegraph. As we reported here at The Reg (where no such crotch checking goes on, except between consenting adults), the discovery of the sneaky devices “kicked up a storm of protest” which, if nothing else, demonstrates that we’re not the kind of journalists who are afraid of mixing our clichés.

According to supplier OccupEye, the little battery powered sensors detect motion and heat, thereby determining the presence of someone at the desk. Of course, not everyone is lucky enough to have a full complement of limbs, so the gadget isn’t looking for legs but is designed to spy horizontally at your sausage and dumplings or indeed, according to gender, your cellar door.

Even OccupEye’s company logo makes this point. See how the warm red waves radiating from the device are targeted straight between Simon Templar’s knees. A saint he ain’t, having been digitally molested under his own desk without ever noticing.

All this seems a rather complex way of determining whether or not someone is sitting at a desk. This is especially so at The Telegraph, whose gigantic editorial floor is overlooked by an eyrie of gallery windows, meaning you can simply stand by a glass pane and tally-count the people below whenever you fancy.

Analogy time. Consider this old Kodak Brownie Vectra camera that I found while clearing through my mother’s hoarded junk at her now-vacated house last week. This camera is a basic plastic box with a lens and shutter button at the front, plus a rectangular hole near the top acting as a viewfinder. 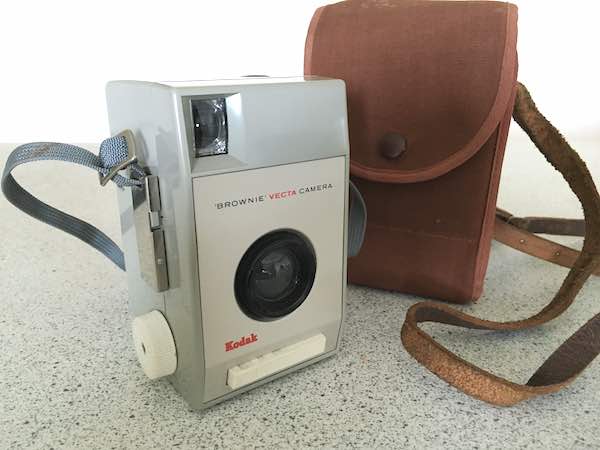 My Mum's Brownie camera from the 1960s, complete with original canvas case and leather strap

When you open it up, all that’s inside is a spindle on which to thread a roll of film. Otherwise, it’s an empty box. That’s it: the entire internal workings of a Brownie. But that’s all you needed to take photos in the 1960s. 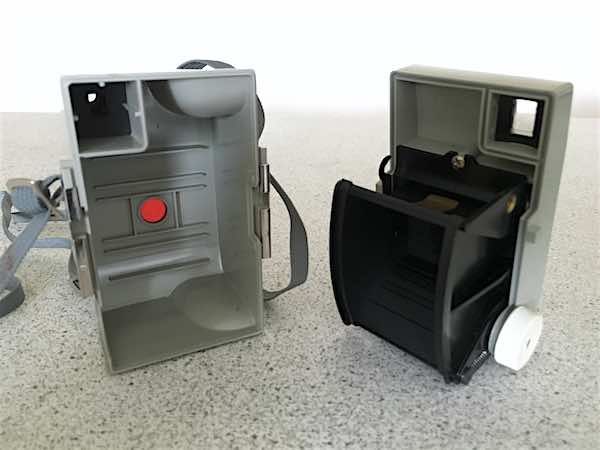 A virtually empty interior with one moving part

Compare this to the complex internal workings of a digital camera, in which any number of a million things can go wrong – especially if I choose to prise it open with a chisel to take a look. It takes better photos, of course, and grabs them in a more convenient format, assuming by “convenient” you mean having to buy a separate computer to which you must download the image files… unless they were automatically uploaded to cloud storage, in which case no-one knows where the fuck they’ve gone and you’ll probably never find them again.

The whole process just gets more and more complicated and expensive, just to take a bloody photo. And so it goes when checking who turned up to work this morning. Do you pencil a tick in a notebook or install tens of thousands of pounds of groin-gawping gadgetry?

By the way, one of the reasons I took the trouble to open up the Brownie was that HLW heard from an acquaintance that one of the latter’s dotty old relatives used to hide money inside cameras, in the cavity where the roll of film is supposed to go.

No such find turned up in the dungeons of Mater Dabbs but I’m still checking her digital camera in case she squirrelled away some bitcoins.

The OccupEye device is also intriguing in its very reliance on movement AND heat. Haitian zombies and Transylvanian undead won’t get detected, for sure, but everyone else will. I suppose it means you can’t get away with stuffing an inflatable doll and hot water bottle in your chair while you nip off early. Sneaky.

On the other hand, I wonder whether the devices will track overworked employees who are inconsiderate enough to drop dead while on shift at their hotdesks. First the employee stops moving but that’s OK because the device can still detect some heat. Then the heat gradually fades away, whereupon HR is automatically informed by text message that they can turf the body into the bins and free up the desk for the next wage slave.

Hmm, there could be some mileage in this. I propose another Kickstarter project.

Allow me to introduce BrownEye, a staff attendance monitoring device designed for integration into your office chairs. Focused vertically upwards, it stares up each employee's jacksie, detecting not just heat and motion(s) but also determining what your staff ate for dinner the previous night.

Staff data is constantly uploaded to a worldwide database of chuffs – the BrownCloud – which allows prospective employers to run an immediate arse-check while the interviewee is still sitting in front of them.

Let’s get this product out there now! Squeeze the day! ®

Alistair Dabbs is a freelance technology tart, juggling IT journalism, editorial training and digital publishing. He once employed an advertising sales dude who suffered from long-term back problems and was therefore forced to work standing up. It was remarkable how much ad revenue the man generated each month given that, according to our employee detection system, he was never there.