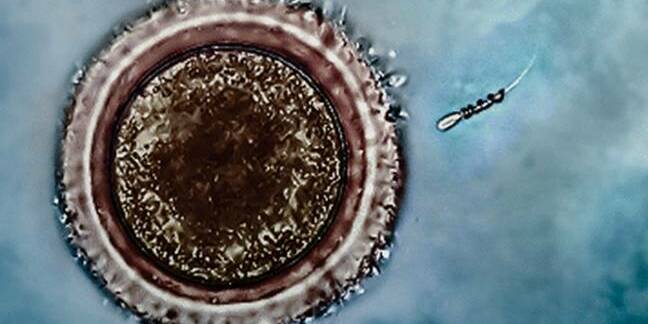 Video Scientists at the Institute for Integrative Nanosciences in Dresden, Germany, have successfully tested a tiny motor that can be attached to sperm to give them an extra push to meet a human egg.

The research, published in the latest issue of Nano Letters, details how the team built a screw-like metal helix that fits around the tail of a sperm, cradling the head. The helix is then rotated using magnets and directed towards the waiting egg and the helix's spin is reversed to disengage from the sperm.

"Our results indicate that metal-coated polymer microhelices are suitable for this task due to potent, controllable, and nonharmful 3D motion behavior," the eggheads noted. "We manage to capture, transport, and release single immotile live sperm cells in fluidic channels that allow mimicking physiological conditions."

The team has successfully used the technique for bull semen in the past. Now, this is the first time human sperm has been motorized. While the human case has had a successful test there's a lot of work to be done before your doctor can speed up your lovin' spoonful.

For a start the scientists want to see what the effects on the sperm are from being transported in this way. It's possible the appliance of magnetic forces to the sperm could cause damage to the cellular structure that could cause problems.

You might ask why bother? After all, our sperm have been doing this for eons without mechanical assistance. But the technique could prove very useful for infertile couples, since 20 per cent of men have sperm that isn't very good at swimming, leading to some fertilization techniques to only have a 30 per cent success rate.

By assisting sperm to the egg, the researchers hope to get a much better rate of fertilization than traditional techniques. Until then we'll just have to rely on more old-fashioned methods to ensure the next generation. ®

NASA mission's airy position: To check if extraterrestrial bonking will work as expected

The RPG With apologies to Joy Division

Astronaut reproduction could be possible one day, boffins reckon