Hitachi Data Systems is taking its marketing attack direct to XtremIO and Pure Storage with a brand new, entry-level, all-flash array storage line, the HFS A series, separate from its existing VSP and HUS arrays.

The HFS (Hitachi Flash Storage) product comes in three models: A220, A250 and A270, each with dual active:active controllers and up to 60x1.6TB SSDs in a 2U rack enclosure. The A270 controller has 256GB of total cache, with the others at 128GB. Average response time is less than one millisecond.

With the A270 offering up to 384TB effective capacity in 2U, HDS claims it is the industry’s densest all-flash array. It claims the capacity density (TB/U) is 5-10x better than competitive models from EMC and Pure Storage. They are also more power-efficient as the energy consumption (Watts/TB) is lower than both a dual x-brick XtremIO and Pure Storage FlashArray //m70, says HDS. 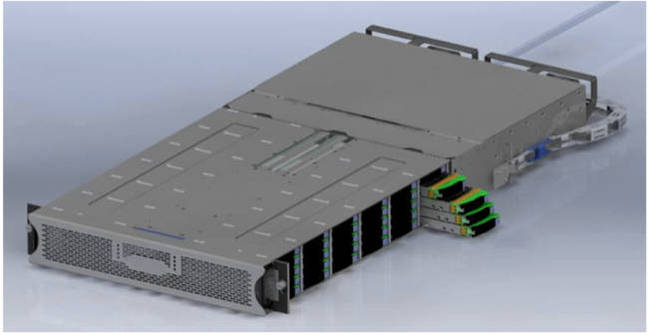 The NAND used is 2bits/cell MLC and the SSDs have a SAS interface. There are 30x2.5-inch SSDs loaded each side of the enclosure in six rows of five slots.

These HFS arrays have a new operating system, HFS Software, written specifically for the product. Its data services include in-line deduplication, compression, thin provisioning, snapshots, replication (asynchronous and synchronous) and encryption. These are user-selectable so as to optimise for performance or storage efficiency. Deduplication block size can also be tuned to balance data reduction rate with performance.

This system has Quality of Service (QoS) features with both maximum IOPS and bandwidth controllable at a logical volume level.

HDS says the systems are easy to install and can be up and running in minutes.

Back in November HDS upgraded the flash version of its range-topping VSP array with 2nd generation, PCIe-connected flash modules featuring in-line compression (FMD DC2). There are 1.6TB, 3.2TB and 6.4TB modules and they are loaded into a 2U drive tray.

These flash modules are not used in the HFS system, standard 2.5-inbch SSDs being used instead.

The company also has HUS 100 arrays and a HUS VM array family that slot in below the VSP F and G series.

The HFS A series can be virtualised within HDS's SVOS environment.

As the HFS A series is a purpose-built all-flash array, incapable of having disk storage, it should meet the criteria for inclusion in the all-flash editions of Gartner’s Magic Quadrant and IDC’s marketscape, from both if which HDS has been excluded in the past.

The prime competitive focus is on EMC's XtremIO and Pure Storage's FlashArray //m. HP's 3PAR 7450c is also in the same market area but HDS is paying less attention to that. The attributes HDS is concentrating on are density, performance and electricity draw.

HDS will also send the HFS in to bat against Violin Memory's FSP, IBM's FlashSystem, X-IO, and all-flash versions of hybrid arrays from Dell, EMC, IBM, NetApp, Tintri, Tegile and others.

Here is a roadmap for intended HFS developments:

The scale-out support coming in the last 2016 quarter is interesting as that is something Pure Storage does not have. It will enable the HFS arrays to compete with larger and existing scale-out systems such as those from Kaminario and Solidfire.

HDS is thinking seriously about adding an NVMe interface capability but there is nothing it can about that in roadmap terms at the moment.

A street price for an entry-level A220 with 16TB of raw capacity is $125,000, which includes all hardware and software, installation, and three years of support.

These numbers are sufficient that HDS thinks it will be able to undercut EMC XtremIO and Pure Storage in the average deal.

The HFS A series is generally available now. ®